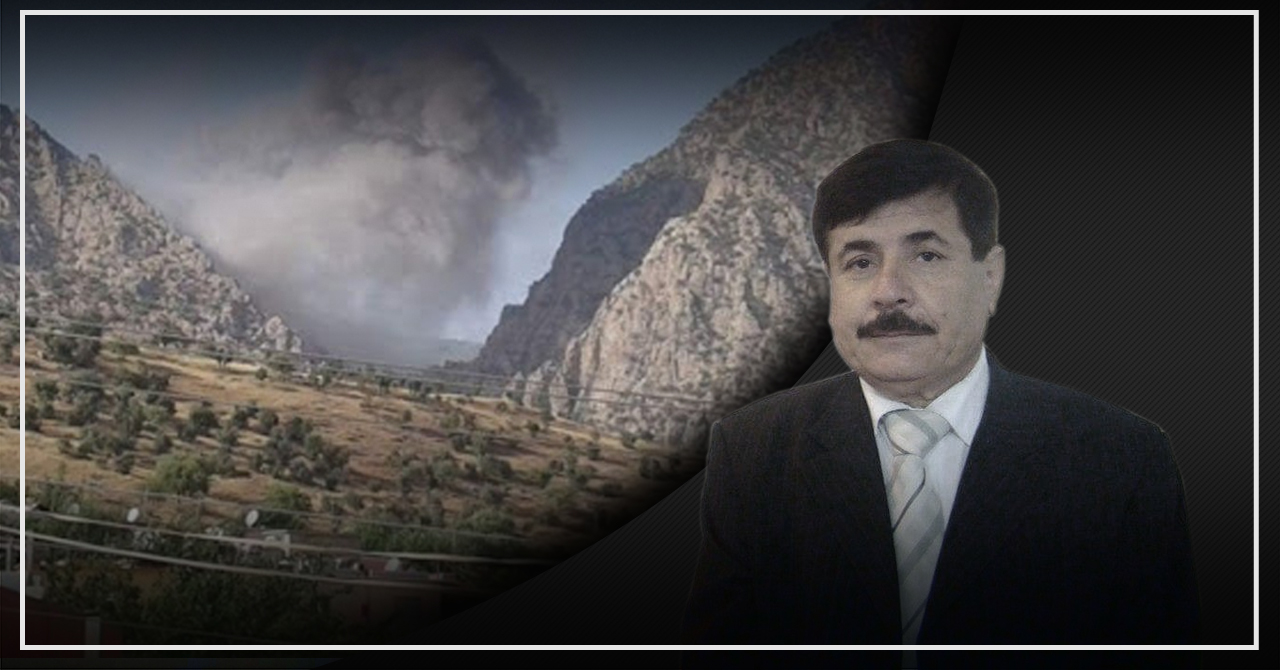 The journalist and political activist Kawa Nader Qader said that the government of southern Kurdistan has not fulfilled its duty towards the attacks on its lands because it builds its positions according to the partisan interests and not from the national standpoint, stressing that any cooperation with the Turkish occupation army against the Kurdistan People's Defense Forces (HPG) is a non-national stance and it does not serve the Kurds.
On June 15th, the Turkish occupation's warplanes bombed Maxmûr refugee camp, Şengal province, and the legitimate defense zones in southern Kurdistan.

Our agency held a dialogue with the journalist and political activist Kawa Nader Qader from Başûr Kurdistan about the aim of the Turkish attacks on southern Kurdistan and their gravity to the gains of the Kurdish people and also the silence of the Kurdistan Region's government over this aggression.

Turkey continues its attacks on southern Kurdistan, but the southern government has not shown any serious position against these attacks so far, why in your opinion?

According to my perception, the Kurdistan patriotic figures, especially those who bear the most responsibility for the future of their people, should make all efforts to thwart the brutal attacks of the Turkish forces and their mercenaries and not to exert and spend energies about the failure of a certain party to carry out its national duty because the people are aware and feel all national and non-national positions, and Turkey follows the policy of "divide and conquer" towards the Kurds.

Therefore, the honorable patriotic persons are required to focus on how to repel the attacks today without turning a blind eye to the positions and actions of some towards what our country is exposed to by the Turkish brutal occupation.

The region's government has not fulfilled its duty to what happens to the homeland ; the challenges and dangers facing our people and our homeland Kurdistan because it builds its positions according to its partisan interests and not from the required national perspective, not only now, but throughout history.

The deficient patriotism cannot be wagered, yet there are voices who expressed their opinion about the Turkish attacks, and considered these attacks a threat to all Kurds, not just the Kurdistan People's Defense Forces.

The enemies and the occupiers of Kurdistan have benefited greatly from this point in the outbreak of wars among the Kurdish forces.

The biggest danger here is not from the deficient national positions, but rather cooperation with the Turkish forces, which is a national betrayal that cannot be accepted, the Kurdish people will not forgive and history will not spare them.

The Turkish occupation targeted civilians in both Şiladizê and Sulaymaniyah. What is Turkey trying to do in the region by attacking civilians and what message does it want to deliver?

The Turkish forces' attacks on Kurdistan (Bakur, Rojava, and Başûr) are chauvinistic. According to the Turkish national theory (a good Kurd is a dead Kurd) and according to the Turkish Mulli Charter (Başûr Kurdistan is part of the Turkish state) i.e. every living Kurd, even if at their service, is considered a threat and an enemy to them, so declaring war is against all Kurds and not only against the Kurdistan Workers Party (PKK).

In fact, the Turkish state feels a shortage of ingredients in its national identity because its history begins in the Middle East with a group of tribes that came through power and occupation after 1220 AD to the Middle East region, and then built its authority and state on the land of others by violence, killing and looting.

As for the focus on the people in the border region, it is to annoy them and push them to put pressure on the Region's government in order to demand the exit of the PKK from its areas and to push the Peshmerga Forces to clash with the Kurds. With every attack or shot that Turkey launches on the people and lands of Kurdistan, passion for the Guerrilla Forces and national unity among the Kurds increase.

The Commander of the People's Defense Forces headquarters Morad Qerilan criticized the political parties in Başûr Kurdistan for not taking a position on the Turkish attacks, and on the other hand he said that there is cooperation between Turkey and the Kurdistan Democratic Party (KDP). From this standpoint what is required of the political parties and peoples of the region, and why they have not raised their voices so far?

I say frankly that any cooperation with the Turkish forces against the Kurdistan People's Defense Forces is a non-national position and does not serve the Kurds nor themselves. With all this, we now feel a change in the positions of government officials and the Kurdistan Democratic Party in a relative way towards Turkey, as Mr. Masoud Barzani and the head of the Kurdistan Regional Government adopted silence side, and there are those who say that the silence came to please Turkey, and at the same time some say silence comes to take the situation more seriously and prepare for the next stage which will be more complicated.

In 2017, the authorities of southern Kurdistan announced the independence referendum, and Turkey rejected this move in a big way. Erdogan said at the time that their silence in 2003 towards Başûr Kurdistan was the biggest mistake, and it will not be repeated again. So, where are the relations between Turkey and Başûr Kurdistan going, and how do these relations threaten the gains of the Kurdish people?

Above all, it must be known that there are no Kurdish relations with Turkey because the Turkish state does not recognize the existence of the Kurds at all, so how do you recognize the existence of a Kurdish entity, but there is a relationship built according to the theory of Ozal "give one and take three" (Turkey deals with Başûr in order to control security, political and economic aspects).

As I said earlier, the philosophy of the Turkish state in relation to the Kurds is "every Kurd, even if being an agent for them, is an enemy and a terrorist" and their fate will be like the fate of "Hassen Khairi" executed by Mostafa Kemal after all the services he provided them because he used to wear the Kurdish costume.

Silence of some political circles in Başûr Kurdistan comes according to them because they understand the Turkish intention. Although I personally do not agree with this opinion, they do not want the escalation from the Kurdish side in order to win international sympathy, especially America and some European countries because if America and other international powers permit Turkey to continue, they will occupy Başûr Kurdistan, abolish the Kurdish government and treat the Kurds as they treat the Kurds in Bakur Kurdistan.