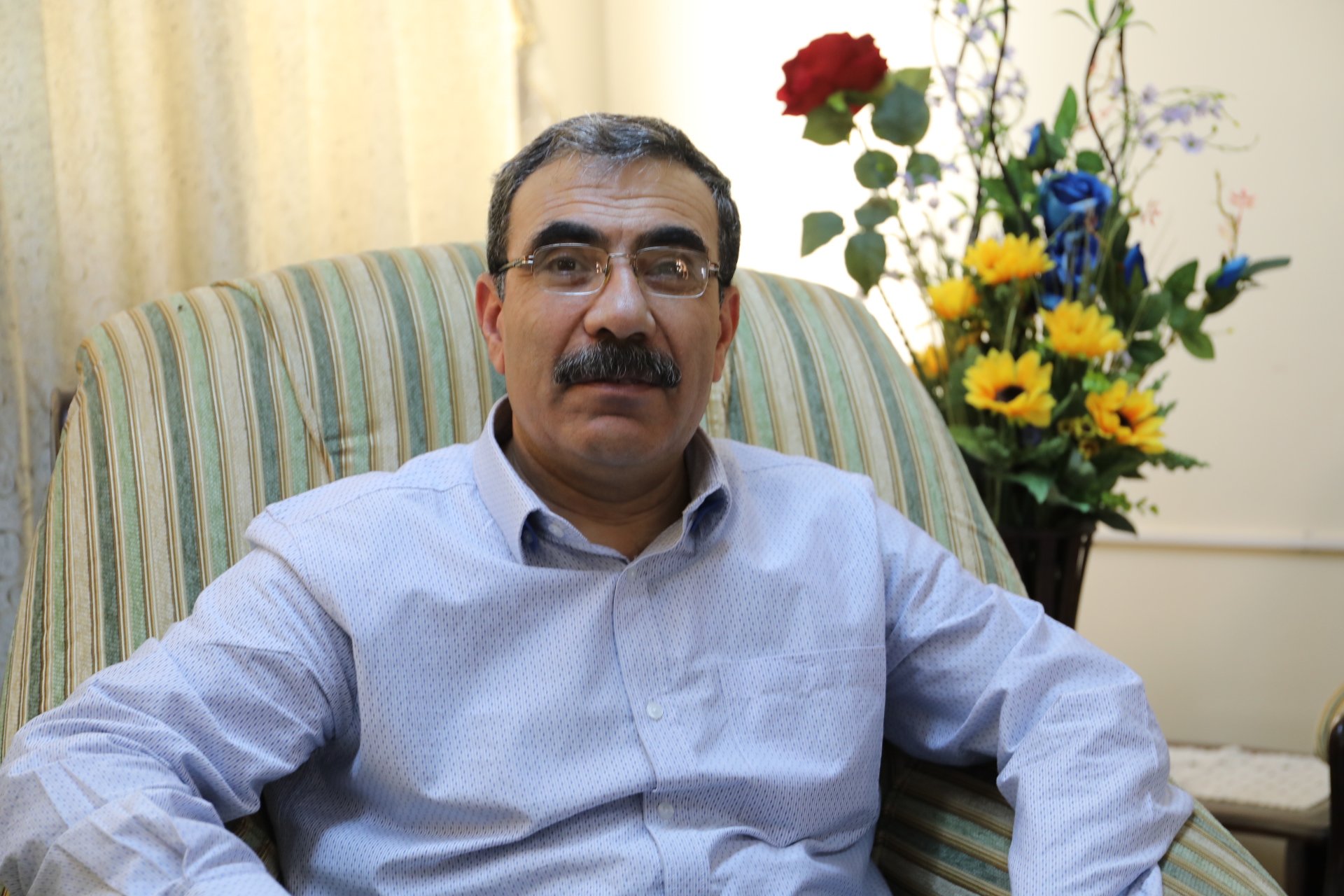 Khalil said that the formation of the security strip around Idlib, which resulted from the bilateral agreement between Russia and Turkey may be the new border between Syria and Turkey, stressing that Idlib became a part of Turkey, and this is a move to complete the project of Erdogan in Syria.

This came during an interview conducted by ANHA agency with the former Co-chari of the Executive Committee of the Democratic Society Movement Aldar Khalil to talk about the latest developments in the Syrian areas, especially Idlib province after the bilateral agreement between Russia and Turkey.

How do you assess the situation in Idlib, what is the Turkish role in it?

The Turkish intervention in Syria has caused more complications. This is the main reason for the prolongation of the Syrian crisis and the distribution of terrorist gangs and mercenaries throughout Syria, which are behind the tragedies and suffering of the Syrian people, the internal causes of the regime and the like. As a result of the policy pursued by Turkey, led by Erdogan, to distribute the groups in the Syrian areas and effected the negotiations' fate in Syria and the balance of power in the Syrian geography, and this impact on the Syrian reality on the one hand and on the Turkish reality on the other hand, the Turkish involvement in the Syrian issue and file and the policies pursued by Erdogan in Syria lie behind the economic crisis experienced by Turkey and its differences with the other countries and the stalemate of relations between them and the rest of the world.

What is important now is to address the situation of Idlib. The Idlib crisis came after the steps taken by Erdogan by abandoning Aleppo and handing it over to the regime and helping the regime to control al-Gouta and its direct intervention in Jarablus and al-Bab. Now the presence of his forces, militias and terrorist gangs in Idlib was a major reason for Russia to resort it and its acceptance to hold a trilateral summit between the Russians, Turkey and Iran to study this issue and to take decisions on this matter, but the tripartite summit that did not give a result, as Russia wanted or as Turkey wanted, so they resorted to a bilateral meeting between Putin and Erdogan.

What is the purpose of the bilateral meeting between Russia and Turkey, and was it really to put a solution to the crisis in Idlib province?

The meeting that took place between Putin and Erdogan was a meeting of distribution of interests and quotas as well as planning for the coming months, Erdogan is in a very difficult position either to give up Idlib as he did in Aleppo and thus lose all groups associated with him in Syria, or insist, as Iran did, or the suspension of Idlib's liberation campaign, Russia studied carefully and tried to feel the pulse and take the views of many countries, and most other countries were calling for non-escalation in Idlib for several reasons, the main reason was Erdogan's threat to European countries when he said that if Idlib has been attacked, he will send the terrorist gangs to Europe and other nations, which raised concerns of these countries, for example, if the attack began, and these groups go towards the territory ruled by Turkey, then Erdogan will direct them to these countries and this is a problem for them.

How do you assess the outcome of the bilateral meeting between Russia and Turkey?

These groups did not accept the departure from Idlib and insisted on resistance within Idlib. The regime does not have the power to defeat these groups, nor was Russia confident that its bombing would be free of international reactions, especially after the position of the United States and alliance countries towards what might happen in Idlib, especially during the spread of information about the possibility of using the system of chemical weapons in Idlib, all these factors helped Erdoğan to persuade Putin to postpone this campaign and agree to form a security belt around Idlib, by this Idlib would be a part of Turkey, and this belt will be as the border between Turkey and Syria. This completes Erdogan's project in which he started in Jarablus, al-Bab, Afrin, and now in Idlib, and Turkey took control of these areas. Now it is affiliated to Turkey not Syria.

How will the parties ensure that there are no violations between the regime and the mercenary gangs?

With the presence of Jabhit al-Nusra and other gangs, the situation is different. Therefore, Erdogan cannot make firm decisions after the issue of the isolation belt. The isolation belt will not succeed. The belt cannot be accepted by Jabhit al-Nusra or other gangs, but it will become a tragedy for Erdogan and Turkey. In the coming days or months, a more difficult stage than it was now, so he is thinking of exploiting the next month by directing these gangs and sending them to Afrin and relieving the burden on Idlib, and thus the danger to Afrin and the east and north areas of Syria as well because they created a new conflict focus and affect Afrin issue as we have intensified our diplomatic, political, military and organizational efforts to liberate Afrin, Erdogan wants to create a new state of conflict to prevent the liberation of Afrin.

What lies behind the regime and Iran’s (the third party of the Syrian file) silence towards the bilateral agreement, Turkish occupation to some Syrian territories?

The regime now does not care about the division of Syria or the truncation of parts of Syria, insofar as it is concerned about maintaining its authority and undermining other gangs, since when they were collected from other Syrian areas, the aim was to limit them to this area. The most important matter for the regime is to keep them without impact in the tight and restricted environment, if they were keen on the unity of Syria they would had moved during the occupation of Afrin, Jarablus and al-Bab and other Syrian areas occupied by Turkey and are still under the Turkish occupation. In Afrin now, the language used by the residents is changed, and the names of the villages are changed. Thousands of Idlib people were brought to Afrin to settled in it, brought by the Turkish occupation of Idlib, so neither the regime nor any other party claiming to be concerned about Syria cares about the occupation as much as the issue of power.

Iran is under a new situation: an American decision and its allies to fight Iran and undermine its influence in the area and to prevent it from forming a Shiite crescent, so Iran is now under attack and subject to a blockade and what is agreed in Idlib may not be in line with Iranian policy, but Iran is trying to make a balance at this stage and does not want to become an influential party that comes into the arena directly.

How do you explain the reactions of many external and internal parties that called for avoiding any military confrontations in Idlib to preserve the safety of civilians while those parties remained silent about Turkish practices towards the people of Afrin?

Some of the parties claim their concern for the lives of civilians in Idlib during the military operation, and call to avoid them in order to protect civilians, as a human feeling, this is a good thing, and we do not want cities to be bombed, destroyed and residents killed, but the question that arises is this international community which puts these things on table now, is it the same situation as when the campaign began on Afrin?. Turkey invaded Afrin while the people of Afrin were uprooted, the property of the people in Afrin was taken over and its population changed, no one moved then and did not declare any such thing, why is this double standard? "They are arguing about humanitarian matters in Idlib knowing that we, as a humanitarian duty or as a humanitarian situation also stand by the fact that civilians are not at risk, but they have to take measures to prevent this, instead of agreeing with Erdogan on interests and things that will do more harm than the city's attack.

How will the agreement affect the fate of Afrin?

This agreement, above all, will give these groups an opportunity to reorganize themselves or send some of their followers to Afrin. This will affect Afrin's demographics. On the other hand, this agreement created a compromise solution between Russia and Turkey, this compromise solution though temporary, but it blocked the way to the emergence of any conflict or contradiction between them around Idlib, if a contradiction appeared that would have had a more positive impact on Afrin, but Erdogan will benefit from this agreement, if prolonged, to consolidate his rule and tyranny and occupation of Afrin.

It is so important to focus all efforts on the liberation of Afrin, so without the liberation of Afrin, no matter or subject can be discussed neither the sovereign of free Syria and democratic North Syria, and we cannot talk about a free Rojava. For us, the issue of liberating Afrin is a strategic one, and it is an essential subject for our discussions and meetings with all parties. Some parties claim that they are keen on Syria to move towards a new phase of the solution in the coming months so as to agree on a new constitution for Syria, this is done, but without Afrin's liberation, this cannot be successful. Without Afrin's liberation, our partnership of these maters will be deficient, which will have a negative impact on these efforts, Therefore, the liberation of Afrin and the delivery of Syria to the solution are linked to each other, we have a difficult stage, intensive interventions and strong pressures, and the parties are many, so Syria is still in a state of intense conflict.

What is the new stage awaiting Syria?

Wherever Erdogan and Turkey are, this means that there are obstacles to reaching a solution, and as Erdogan is a part of this agreement, it may be an obstacle, but I think it will be temporary and would not last long, and its effects will extend to Aleppo and the entire North Syria and Syria in general, our wish is to begin the political solution and dialogue stages seriously and everyone involved and agree as Syrians on the solution, and then will address the issue of Idlib also after the issue of Afrin, Jarablus and al-Bab are addressed.