The mass celebration activities held on the occasion of International Women's Day continue in the Mezkeft Dam of Tirbespiyê district in Al-Jazeera canton, in which thousands of women of the canton participate in their folklore dress.

The mass celebration started by reading the recommendations of leader Abdullah Ocalan regarding women and their freedom, and then reading the message of women from the components of Qamishlo canton, in three languages, Kurdish by "spokesperson of Kongra Star Avien Sweid, and Arabic by the spokesperson for the Syrian Women's Council, Lina Barakat, the Syrian Democratic Council SDC and Syriac by a member of the Syriac Union Sabah Qaryo.

The message included the following:

To all women fighting for peace and freedom of equality:

On the eighth of March of every year, mankind celebrates the International Women's Day, in commemoration of the strugglers who led the ranks of protests, strikes and conferences, and some of them have sacrificed their lives in order to improve the working conditions of women, and then for their right to vote and elect and their political rights, and for equality with men in rights and duties, in an arduous march that began in New York laboratories, and ended in the corridors of the United Nations through many international stations and decades of years, to be completed by a UN decision to adopt the eighth of March as an official holiday, and a special day for women worldwide.

We must know that the issue of the liberation of women is not entrusted to her alone, and the man is not the usurper of her rights, but the culture of the ruling authority and its laws governing the life of society are the ones that rob it of the will, and in all cases the man standing next to her is a human duty, because the man is the other victim of backwardness and tyranny in our societies, and the victim of the existing capitalist world order, not to mention the exceptional circumstance that our country has been going through for nine years, and the state of war, destruction and displacement, and the intrusion of Syrian women in inhumane conditions, as it was the first target in the war in Syria, in addition to Turkish attacks and Its occupation of parts of the Syrian lands and its usurpation of women's rights in all the areas it occupied in Jarablus, al-Bab, Azaz, Afrin, Tal Abyad and Ras al-Ain, where the  women have exposed to heinous crimes that amount to war crimes, from kidnapping, rape, killing, and forced displacement, but women, despite all this suffering, continue to her struggle, to make women in Syria the symbol of freedom in the world.

Therefore, International Women's Day is a day in which we renew our commitment to work hard to achieve gender equality, hand in hand for women and men, young men and women, and on the day we pledge martyrs Hevrin Khalaf, Yadi Aqeeda, Zilan Arab, Zain Kobani, the international martyrs Clara, Rosa, Leyla Qassem, Sakîne Cansiz, and Hana Al Saqr who they sacrificed their lives for the sake of freedom, and they were martyrs in the face of brutal forces by following in their footsteps. 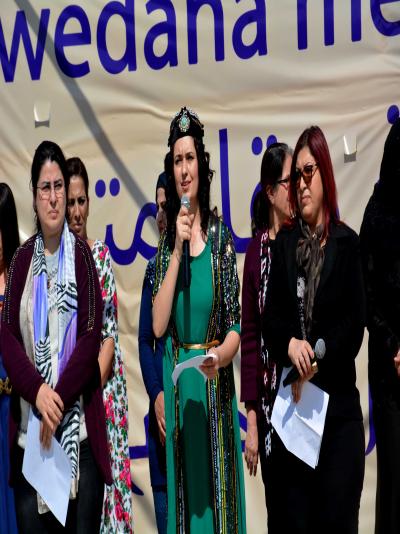 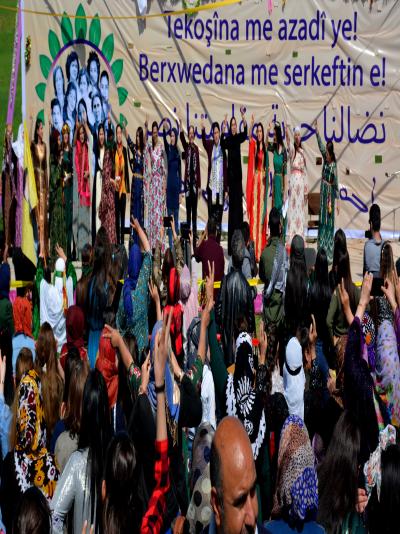