This file documents violence against women in Afrin, starting from Turkey and the jihadi groups supported by the Turkish state, since the attacks and occupation of the northwestern region of Syria at the beginning of 2018, and the people, especially women, have been repeatedly kidnapped and violently abused, especially sexual violence and murder.

In January 2018, the Turkish state invaded Afrin canton with the help of jihadi groups, and attacked the region with all the military means available to it. By March 2018, Turkey took control of the region, established a long-term system of occupation and repression, as well as implementing its plan for a gradual demographic change. Reports document that there are serious human rights violations in Afrin which continue to this day, and with the invasion of the Turkish state and its jihadi groups, about 300,000 people, half of the total population of Afrin, were displaced and forced to leave their homes, and approximately 175,000 were chosen to remain near Afrin, and they are now living in al-Shahba canton, most of them are in camps and shelters for the displaced.

On October 9, 2019, Turkey continued its attacks with the help of its jihadist groups in a large-scale attack on northern Syria and the population along the Turkish-Syrian border. After these attacks in October 2019, hundreds of thousands of people were again forced to displace, and the Turkish invasion occurred as soon as the American forces withdrew from the region in view of the international community which remains silent to this day.

In the wake of this invasion, Serêkaniyê / Ras al-Ain and Girê Spî / Tal Abyad regions also came under the control of the Turkish occupation, and Erdogan continued to threaten to occupy other areas and he continues his attacks day after day with the help of the jihadist groups that he supports.

The Turkish state aims to establish cultural and ethnic hegemony, subjugate and displace, and replace the local ethnic groups with another hegemonic group through forced demographic change, while at the same time raising tensions among peoples in order to prevent them from living together.

However, despite these attacks, invasions, and civil war in Syria that lasted for more than 9 years, the people of the northern and eastern regions of Syria were able to establish the Democratic Autonomous Administrations that include all ethnic and religious groups in the region. Thus, the regions of the Autonomous Administration for North and East Syria have been among the safest place.

Furthermore, one of the main goals of the region's residents is to build a democratic system in which women and all religious and ethnic groups can live freely with each other.

The situation in the occupied territories

In Serêkaniyê, Girê Spî and Afrin  regions, daily life is characterized by arbitrary arrests of civilians by the occupation forces and jihadist groups there, and the kidnapping of young men and women, abusing them to obtain ransom from their families, for example, the tragic situation of Zainab, who is 50 years old, and a mother of three children, wanted to return to the Turkish-occupied Ras al-Ain region, but she was kidnapped by the armed groups, held for two weeks, and released only after a ransom was paid to them.

It can be seen that taking hostages or taking them arbitrarily is one of the common methods used by jihadist groups to spread fear. In addition, the residents of Tal Abyad are subjected to the most difficult living conditions because basic materials such as water, bread and other food are available in small quantities and prices have risen significantly, as well as depriving women of all their rights acquired in recent years before the occupation. In occupied Tal Abyad, women are not allowed to leave their homes without the headscarf.

The situation in Afrin is more dangerous since this region has been under the control of the Turkish occupation for more than two years, and the residents of Afrin have been subjected to violations in recent years by all means and at various levels, as the residents of Afrin are subjected to physical and moral violence and a shortage of primary materials and economic sources mentioned previously. Meanwhile, the administrative councils supported by the Turkish state have built and strengthened themselves there in order to expand the process of demographic change and occupation through violence.

Being the center of the "women's revolution," Afrin region played a pivotal role in developing the democratic administrations in northern and eastern Syria. Here, women's institutions based on direct democracy were established. Women have requested the political equality activist at the level of law and politics, and these institutions put most of this equality into implementation at the level of the communes that represent the basic unit of self-organization for the whole region, women's societies were created in parallel with mixed societies, and these played a crucial role in building and developing the political system in northern and eastern Syria.

Therefore, this democratic and pluralistic system at the grassroots level is what the fascism of the Turkish state considers a threat to its ideology and its justification for itself, and thus it tries to eliminate it. Its aspirations, in addition to the patriarchal, racist, and nationalistic mentality, are clear in its attack and conquest.

The documented crimes and violations of the rights of women and girls in Afrin have demonstrated the inhuman and brutal extent, and systematic violence against women, as they are persecuted and subjected to insult and forced marriage, including many underage girls who have been tortured, as well as physical and sexual violence, and killing females, and many more of women not leaving the home for fear of punishment and violence, women are deprived of all their previously acquired rights, and these acts of violence are clearly evident in recent events. In late May, It has been revealed that many Kurdish women are being detained with ill-treatment and torture in extremely inhuman conditions in the prisons of pro-Turkish militias, and there are reports of kidnapping and killing of girls and women almost every day, all of these are clear violations of human rights and far from humanitarian principles.

These statistics document the reported cases of kidnapping and killing of women in Afrin from January 20, 2018 to June 2020, as follows:

The statistics presented here are the record of women who were kidnapped and killed in this area during the occupation of Afrin since 2018 until this day. These are all the documented cases collected by various human rights organizations such as Human Rights Organization - Afrin, Syria, Violation Documentation Center in North Syria, the Research and Statistics Committee of the Kongra Star in Qamishlo.

The cases of kidnapped and murdered women that have been summarized and reported here by numbers refer to the cases that were identified and published by name, which is the least that can be documented so far for the most part under the current circumstances of the occupation of Afrin by the Turkish state, and it is difficult to identify all the killed and kidnapped, not to mention those who have never been registered and published their names and incidents, for example, there are no local press or local institutions to record these violence and human rights violations.

* Women who have been kidnapped

Since the occupation of Afrin in 2018, more than 1,564 women have been victims of attacks and violence in these areas occupied and controlled by the Turkish armed forces and supported jihadi groups, and a report issued by the human rights organization - Afrin, Syria documented more than 1,000 abductions and disappearances of women, including at least 290 cases of arbitrary detention of both women and children.

Since the establishment of the democratic system in the region of the Autonomous Administration of North and East Syria, a new law for women has been introduced based on the emancipation of women. This decision was implemented on October 22, 2014 by the Women's Bureau of al-Jazeera Autonomous Administration in order to establish women's rights in the new political system.

The law contains points that define specific rights for women and prohibit practices that are considered repressive. The law was passed by Afrin, Kobane, and al-Jazeera regions. Among the most important rights and freedoms stipulated in the law is the prohibition of forced marriage of minors.

In the context of the occupation of Afrin, these women were again deprived of their acquired rights, and forced marriage of minors was again imposed.

Combating the killing of women

A report issued by the Human Rights Organization - Afrin, Syria documented that 50 women were killed at the hands of the Turkish state and its jihadist militias in occupied Afrin from January 20, 2018 to June 1, 2020.

The Research and Statistics Center collected the conditions of some of the kidnapped women that occurred between January 20, 2018 and June 1. 2020, the murders of women and the circumstances in which they were killed and subjected to violence by name, dates will be posted in the photo on our agency's webpage.

Conclusion and our demands

This ongoing attack of violence and attacks targeting women violate all humanitarian and international standards, women with their willpower are a guarantee for the maintenance of any society, and the struggle for women's rights and against violence practiced on women in all forms also means the struggle to protect society as a whole and build a better world.

That is why the efforts of the democratic, ecological project and gender liberation in northern and eastern Syria must be supported under autonomy.

Through the self-government, concrete departments have been created to enable different population groups to live together in peace and achieve the goals of a democratic society that defends women's rights, and we must defend these departments against these attacks.

We, the Kongra Star, call on international institutions and actors to take responsibility and work to prevent further genocide and femicide, as well as forced demographic change.

The following demands must be fulfilled immediately:

* An immediate no-fly zone over northern and eastern Syria.

* Serious steps for the immediate withdrawal of the Turkish occupation forces and all related armed groups from the Syrian lands.

* The creation of an international peacekeeping force on the Turkish-Syrian border.

Imposing immediate economic sanctions on Turkey, and stopping the arms trade with Turkey.   *

* Immediate humanitarian assistance to the Autonomous Administration of North and East Syria's region.

* Human rights organizations must be allowed to immediate access to the areas occupied by Turkey in order to monitor the situation on the ground.

* The practices of genocide and the killing of females must be stopped immediately, the Turkish state be tried and the jihadi groups allied to its be arrested and brought to justice.

* The establishment of an International Criminal Court to try human rights violations and war crimes in northern and eastern Syria. 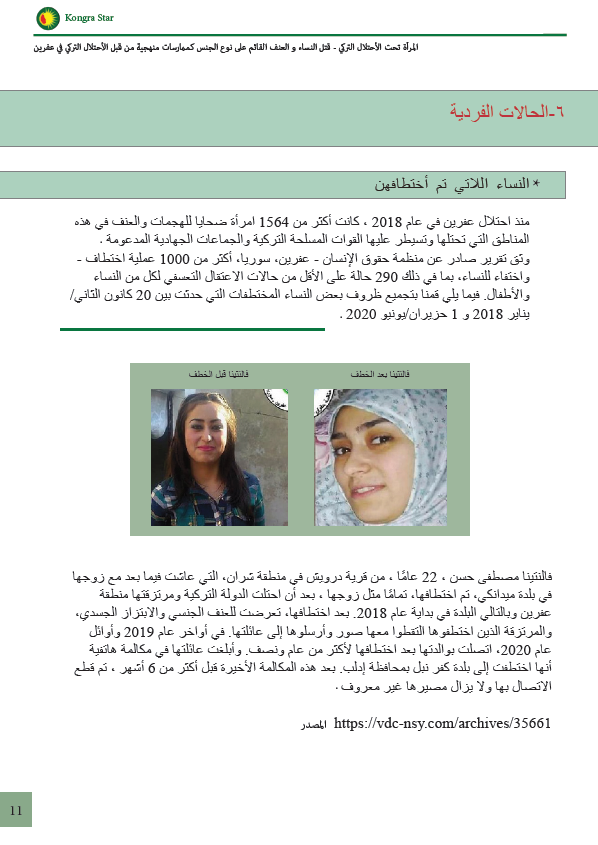 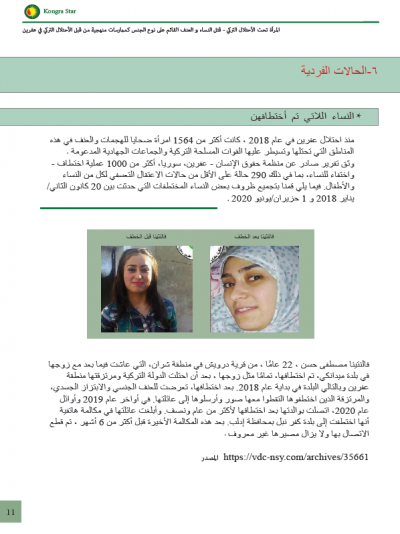 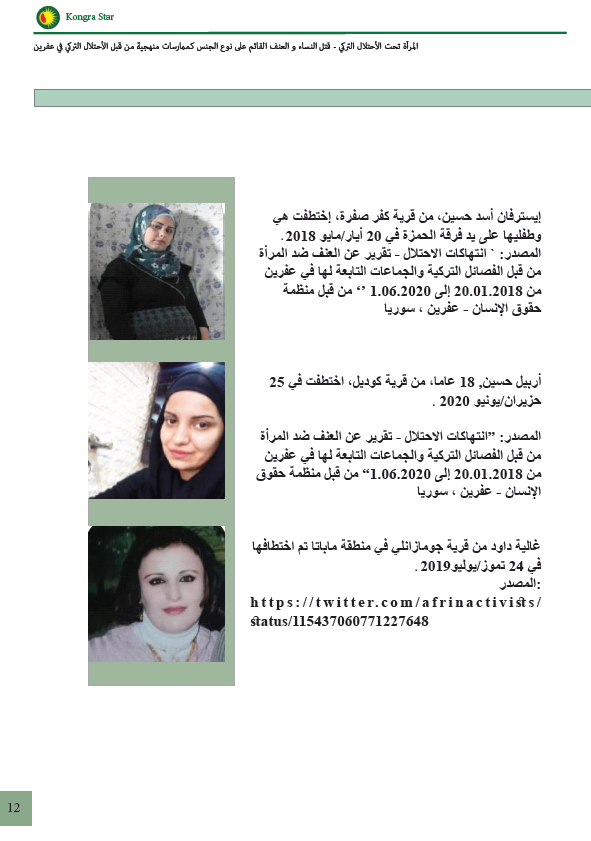 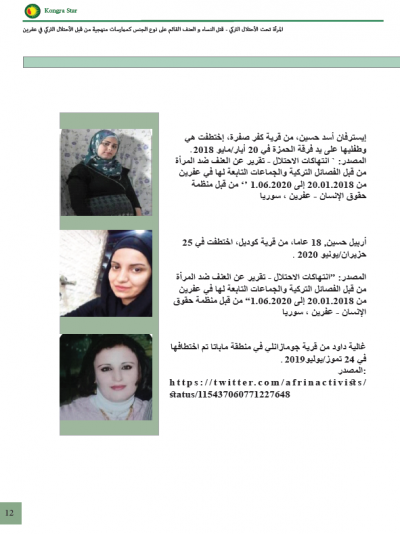 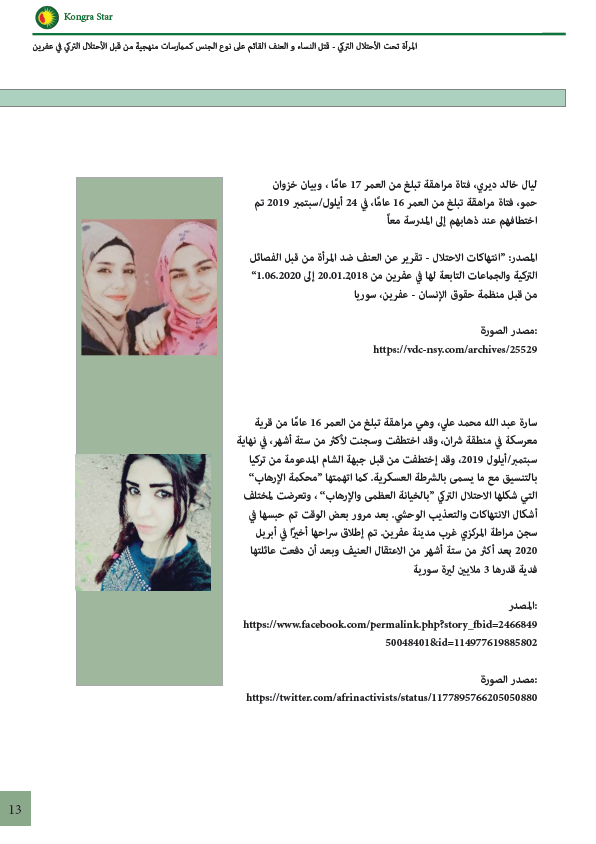 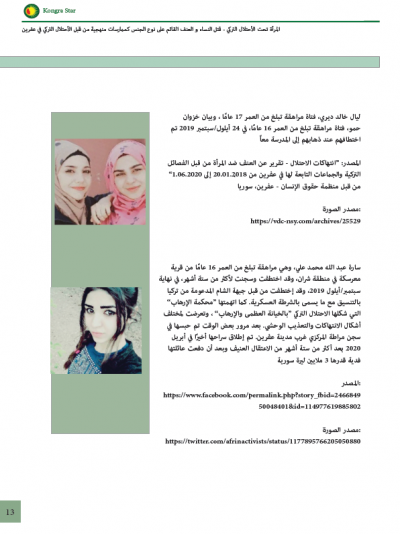 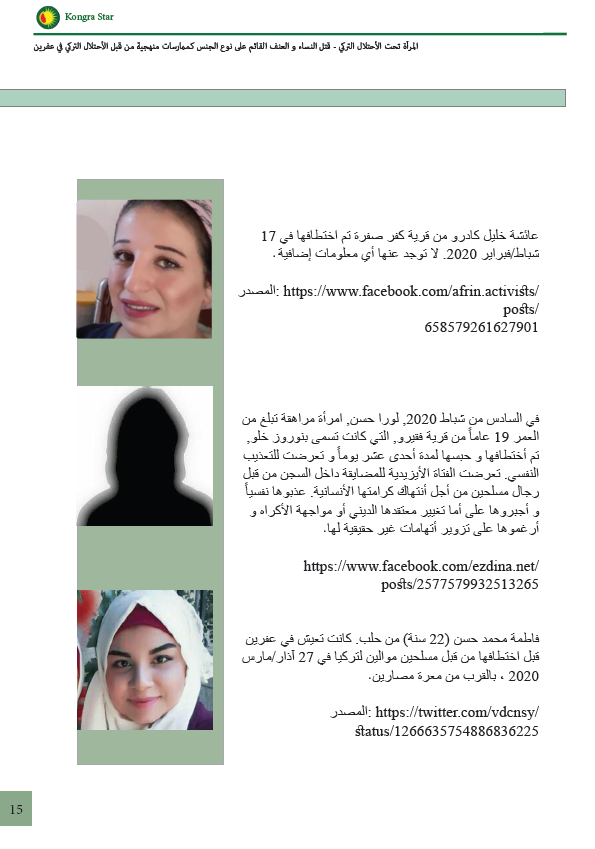 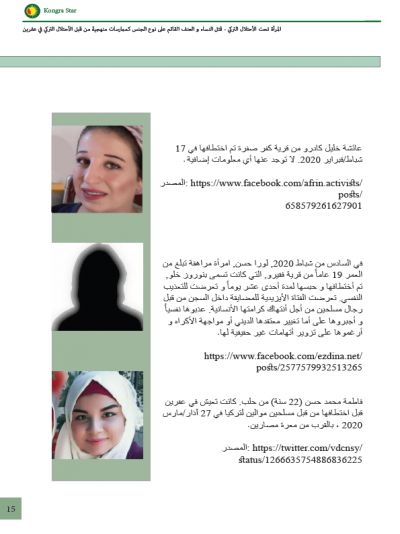 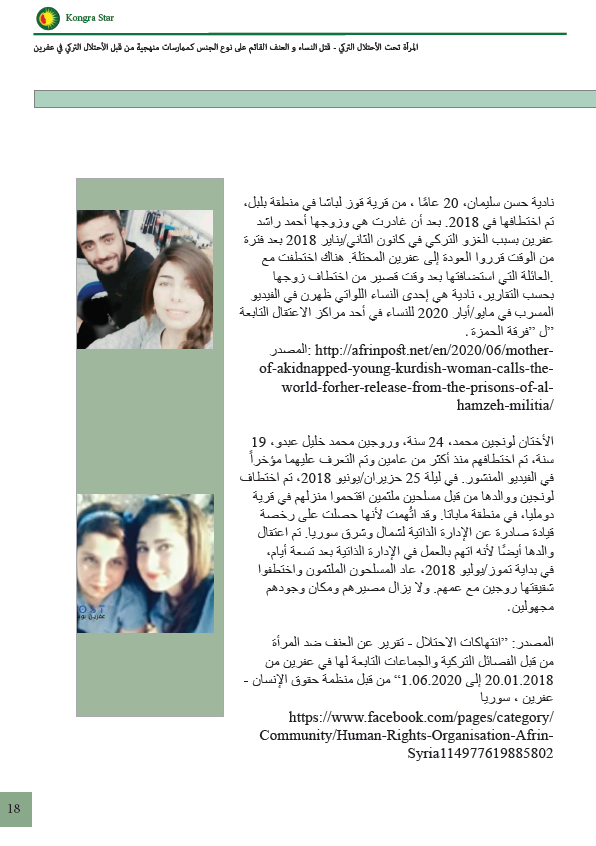 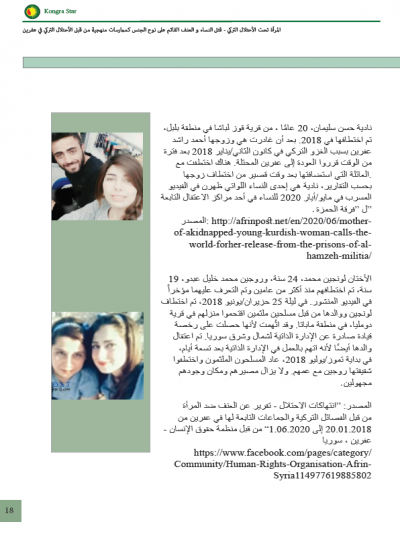 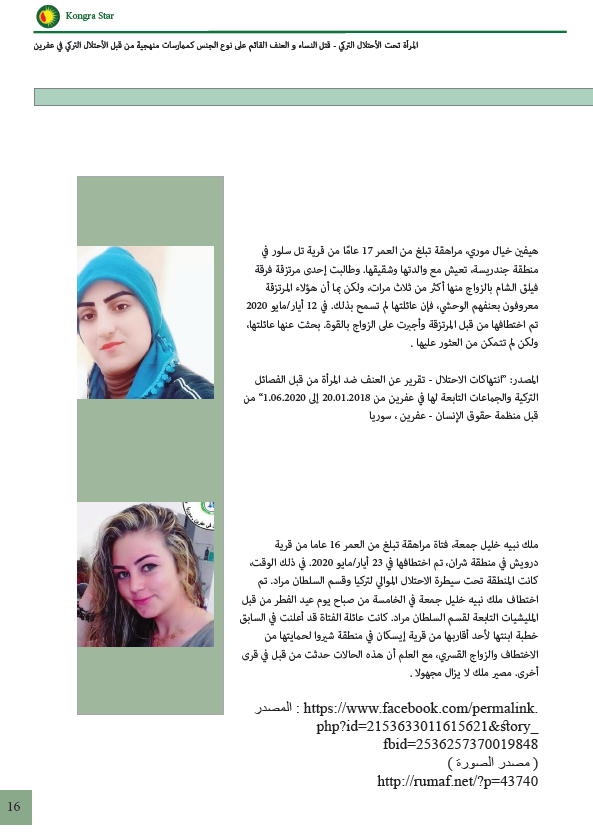 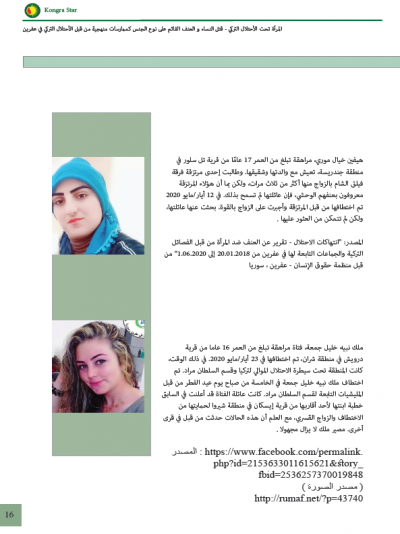 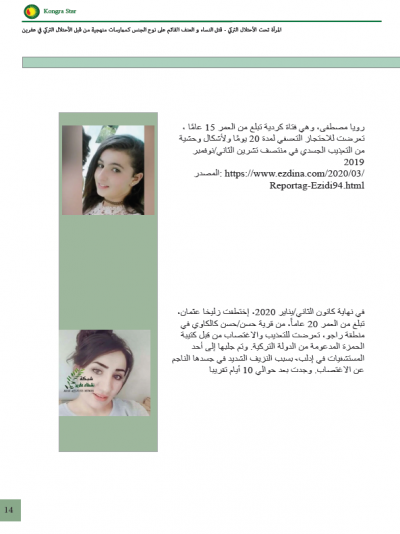 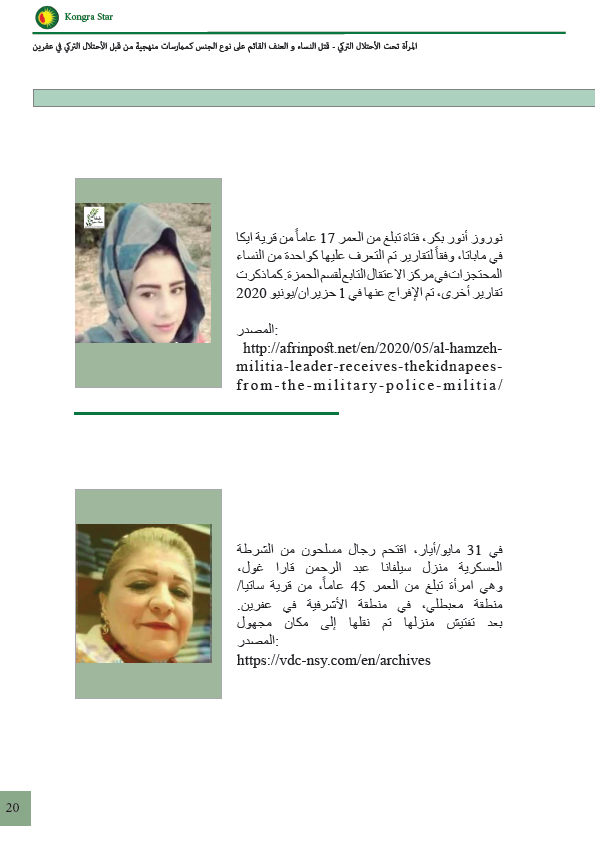 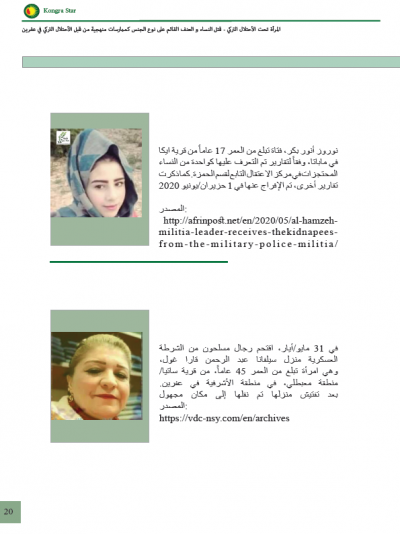 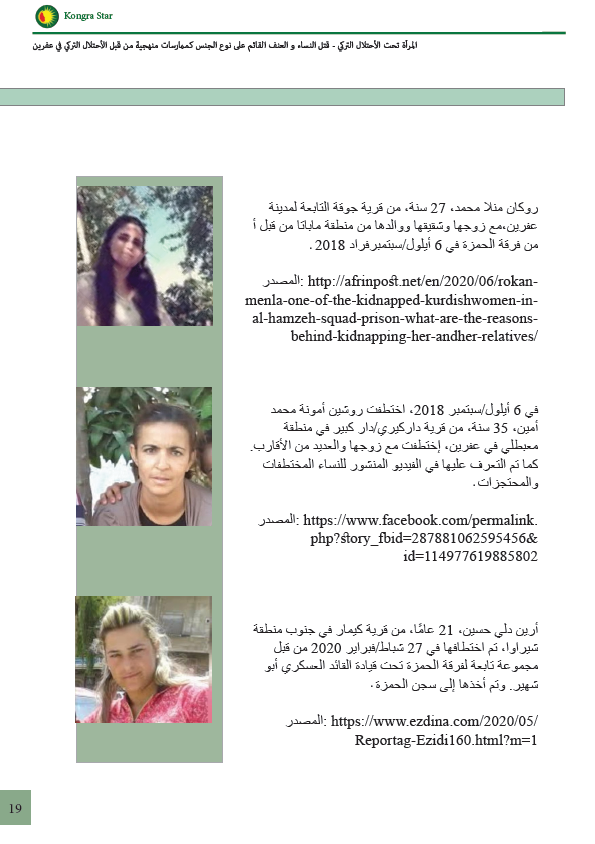 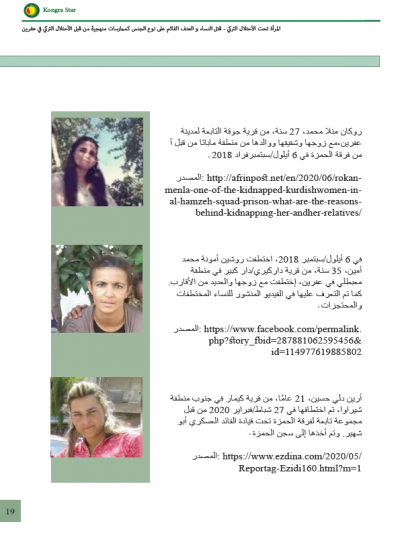 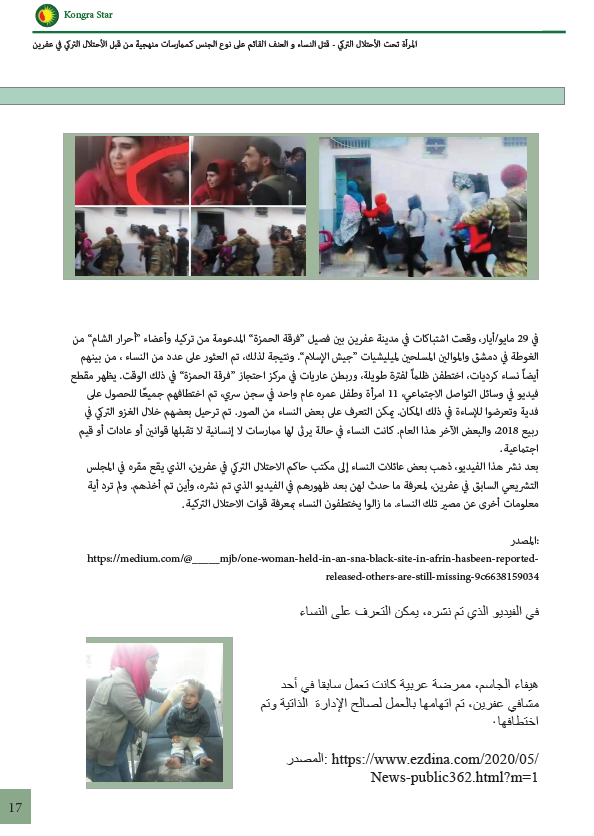 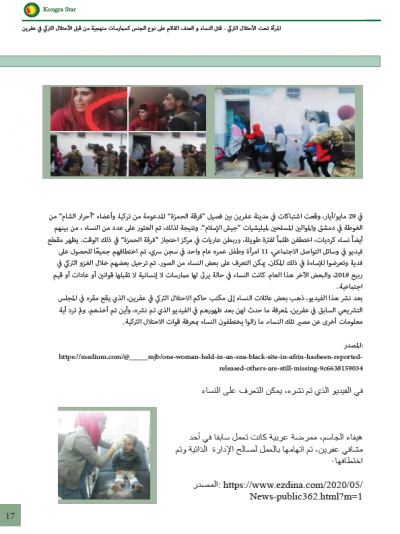 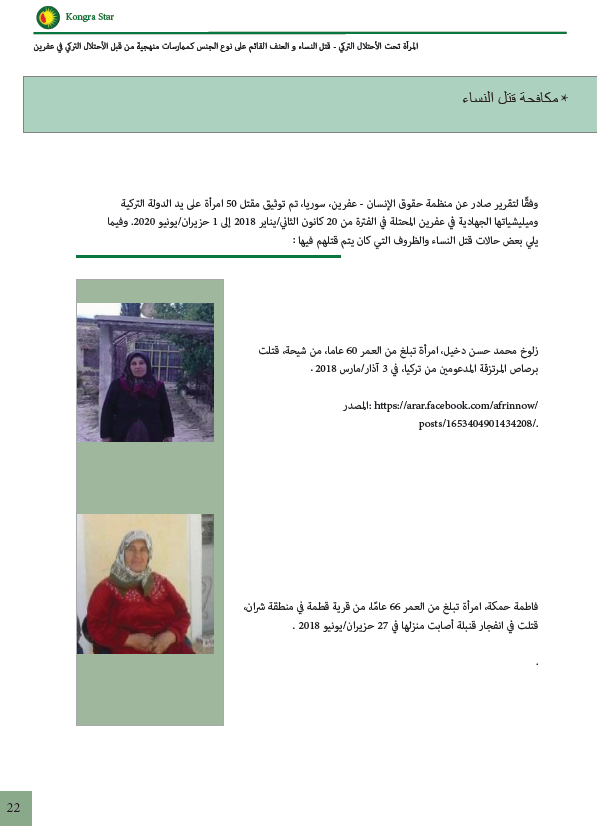 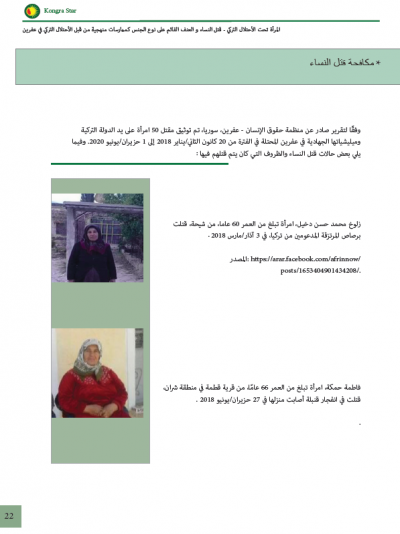 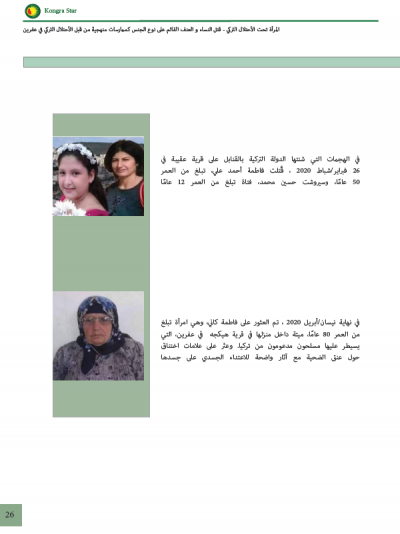 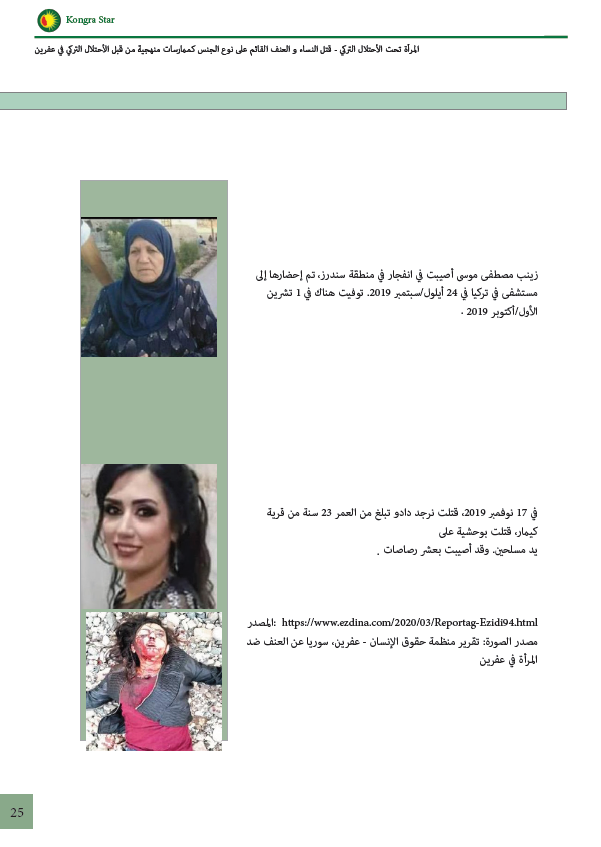 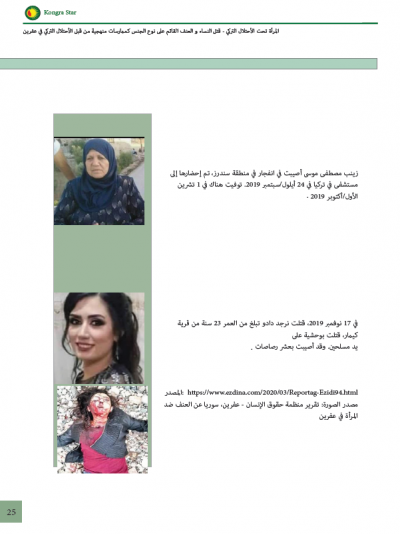 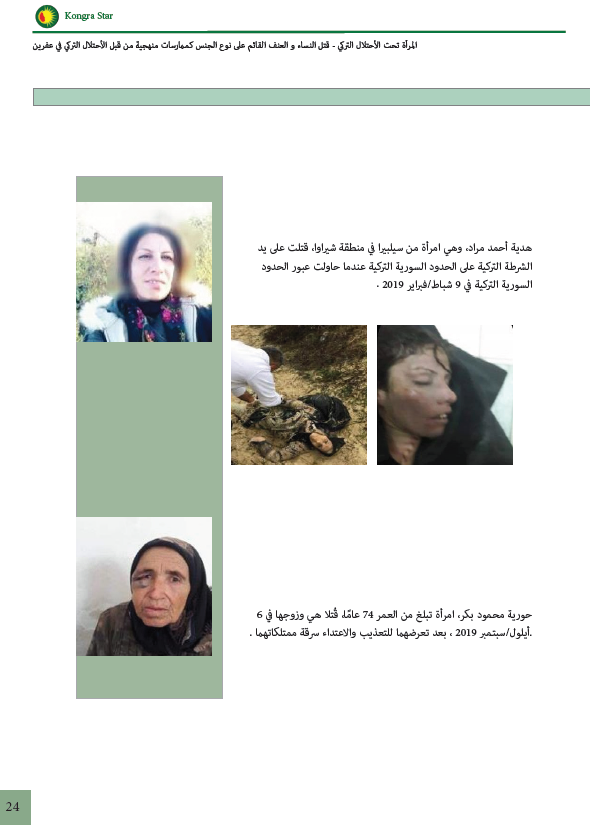 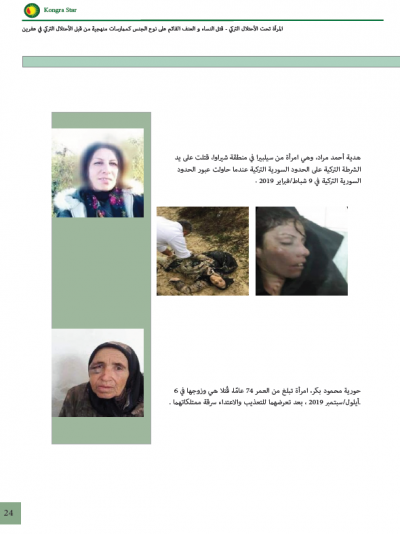 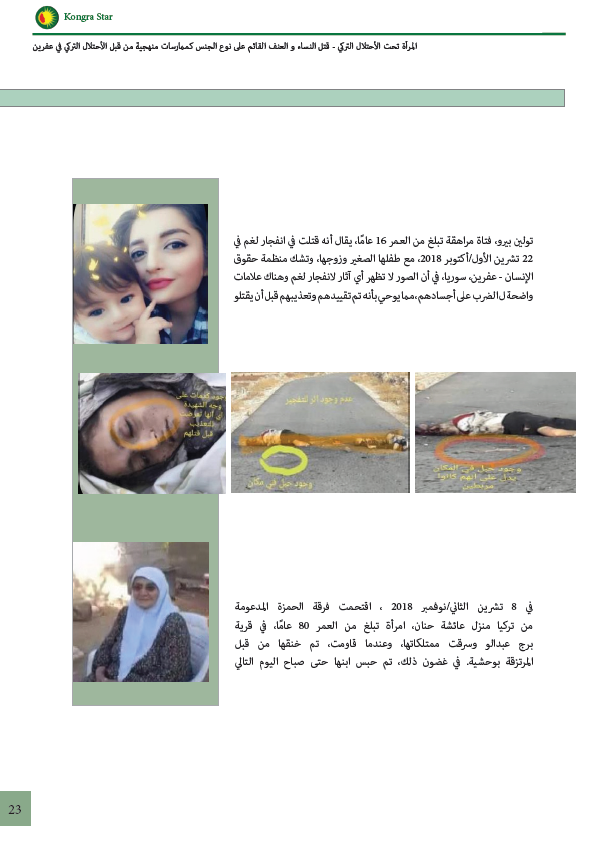 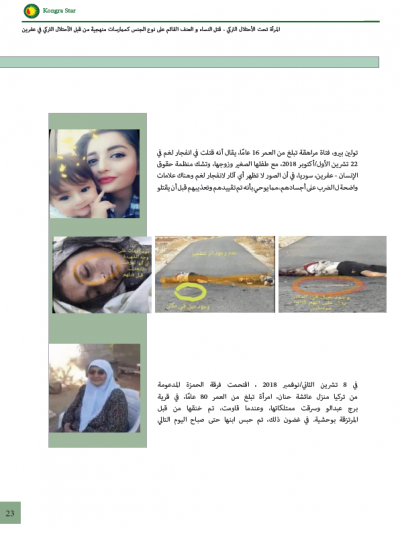 Sara org: Women's organizations must enter the occupied areas and monitor the status of women

The Sara Organization for Combating Violence against Women condemned the occupation mercenar...

First African woman to hold the position of US Vice President

Some parties fabricate on media, clans should prefer public interest

​​​​​​​US Embassy in Beirut: David Hale to visit Lebanon tomorrow

- Some parties fabricate on media, clans should prefer public interest