The statements of the Commander-in-Chief of the Syrian Democratic Forces, Mazloum Abdi, came during his meeting with the Swedish delegation, where they held discussions with the delegation in al-Jazeera region in the public relations center of the Syrian Democratic Forces in Qamishlo canton. The delegation included the the Swedish envoy to the Syrian file Ber Ornioz, the official of the Syrian file in the Swedish Foreign Ministry Caruhan Wenberkh, he official of the International Relief Agency, Berdance, Legal adviser Avin Jetin, and with the participation of the representative of the Autonomous Administration of North and East Syria in Sweden and Scandinavia Ster Kurdagi. "

The meeting began with the speech of the Swedish international envoy to the Syrian file, Ornioz, in which he thanked the Syrian Democratic Forces for the great sacrifices to eliminate terrorism and described their sacrifice and resistance as "great." He said: this visit was necessary to North and east of Syria and to get a close look at the status quo, and confirm Sweden's support for the military forces and the Autonomous Administration in the region after the elimination of Daesh terrorism.

He said that the government of Sweden will continue to support the region to ease the burdens imposed on the Autonomous Administration, and to continue supporting them.

Then, the Commander-in-Chief of the Syrian Democratic Forces, Mazloum Abdi delivered a speech, he began by referring to the battles and the difficulties that have plagued the region for eight consecutive years. "We have recently emerged from the fighting and continue our battles and military operations against Daesh's terrorist cells, to ensure security and stability of the region, which pose a threat to neighboring countries and the West in general. "

"Our military operations against Daesh cells in the region are facing great problems, and we are not talking about the main problem, but we face other obstacles and difficulties, notably Turkish threats," he said. To the north and east of Syria on the one hand, and the threats of the Syrian regime on the other, and that these threats are prolonging the life of the remaining cells in the region, which make it difficult for the operations of our forces to eliminate them."

"We would like to reach a consensus with all parties if they are with the Syrian or Turkish side, and now there is a solution," he said, referring to the great diplomatic efforts exerted by the international coalition to reach solutions that satisfy all parties and remove the outstanding problems between the north and east of Syria and Turkey. "there are now strong efforts by the international coalition to resolve the differences between the region and Turkey, and we are focusing heavily on the need for peaceful political solution and consensus away from the military solution. "

During the meeting, the two sides discussed several other points related to the region, including how to support the military forces to eliminate Daesh cells, and how to provide logistical, service and political support to the region in order to serve the region and its people.

The meeting will conclude with the departure of the visiting delegation from the Relations Center in Qamishlo to the hospitality palace in Amouda district, where it is scheduled to leave northeast Syria tomorrow morning after a two-day tour. 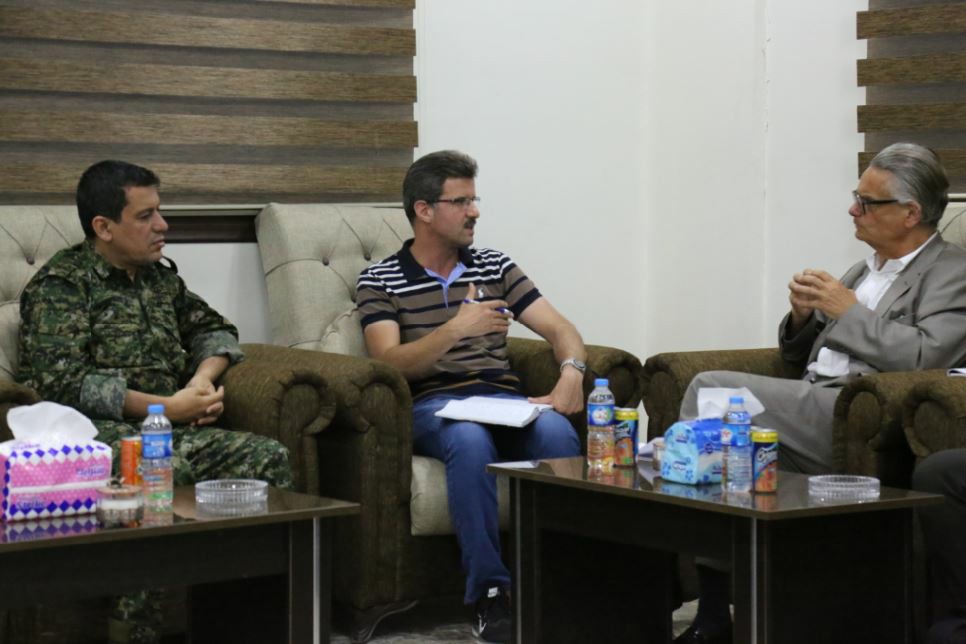 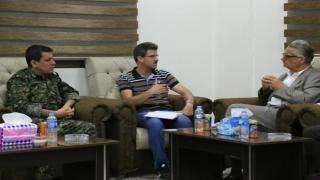 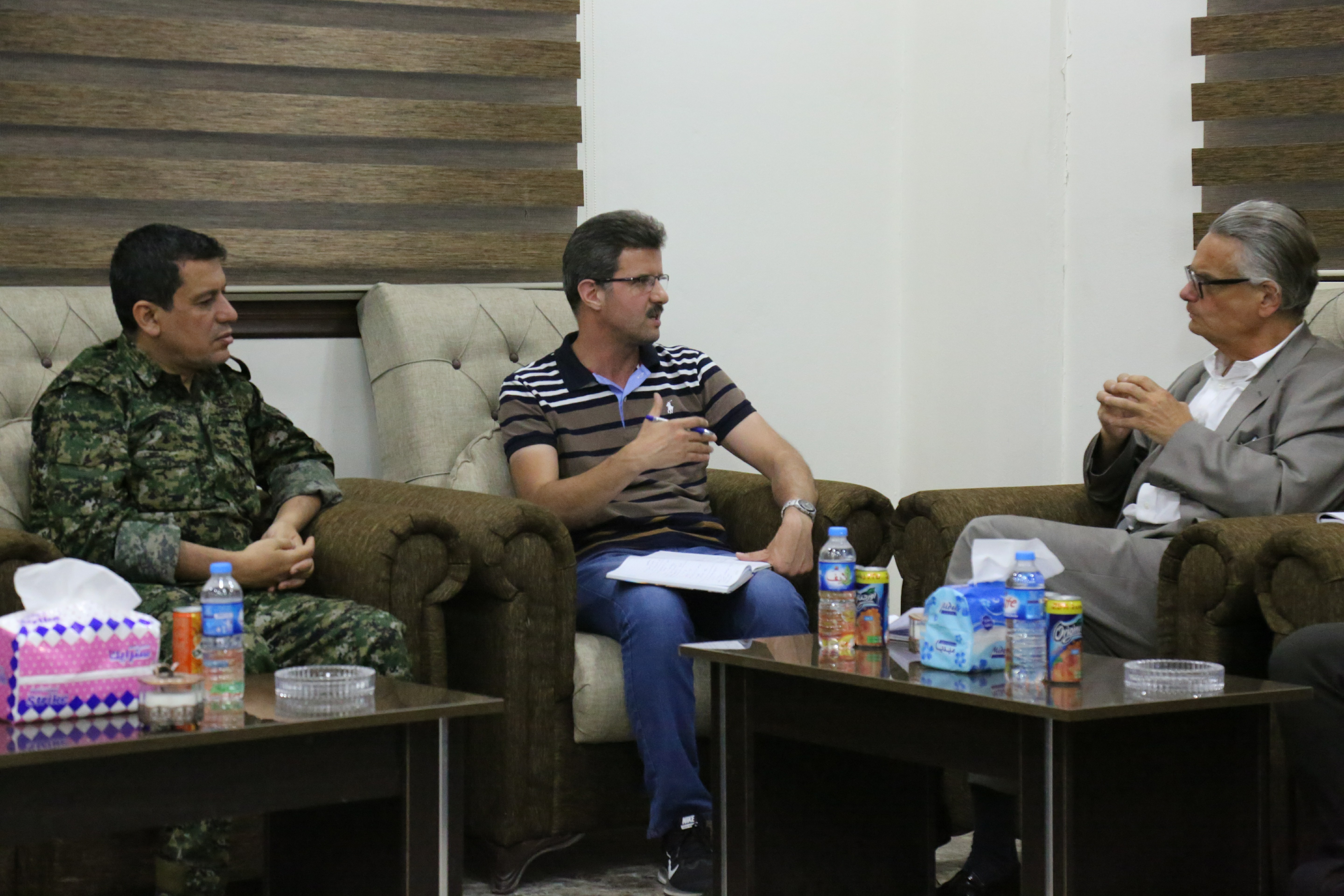 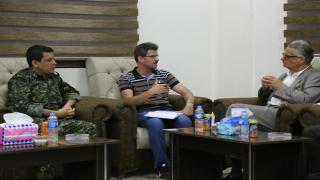 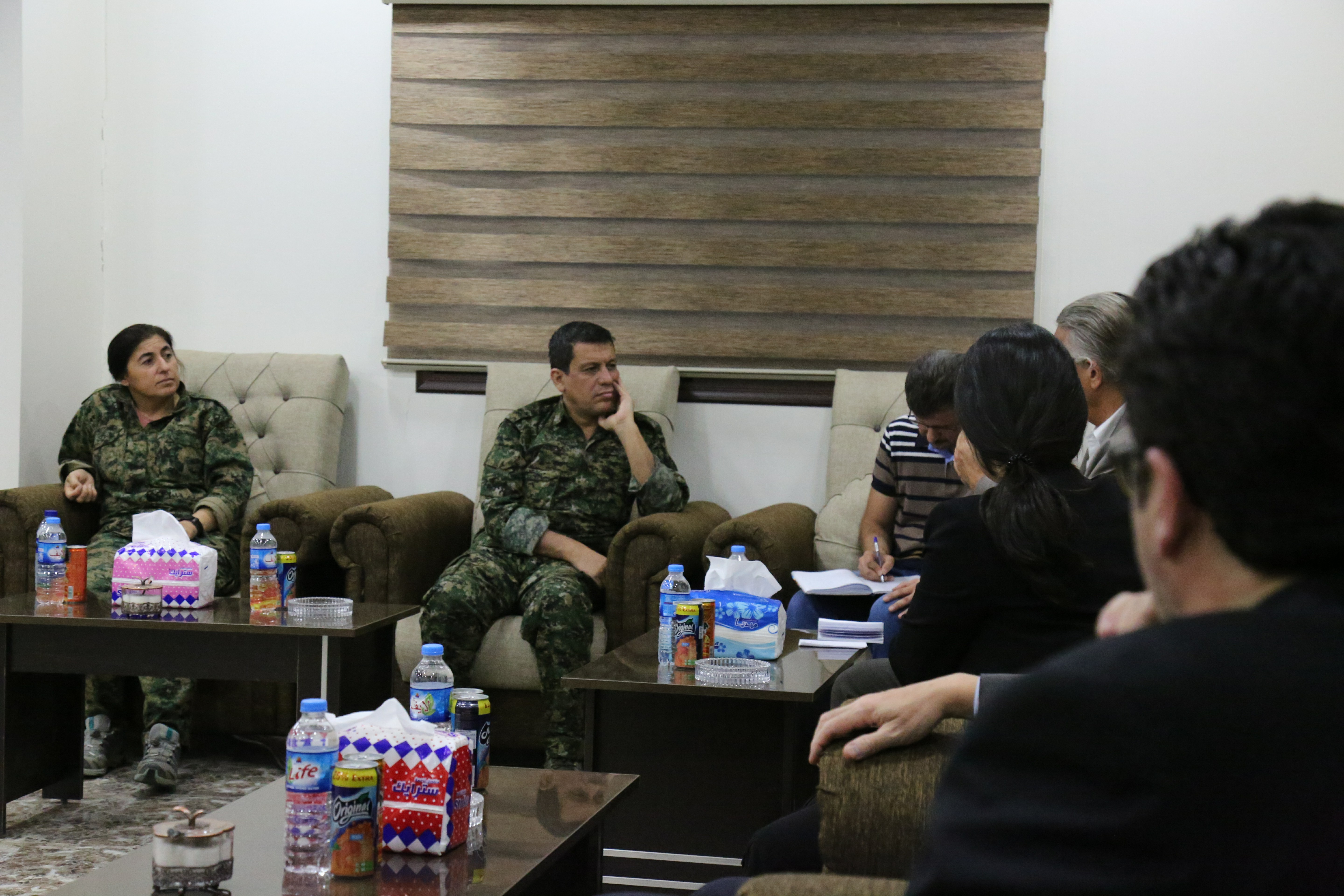 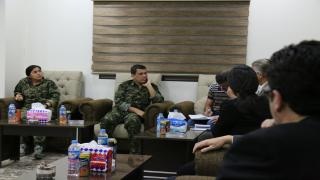 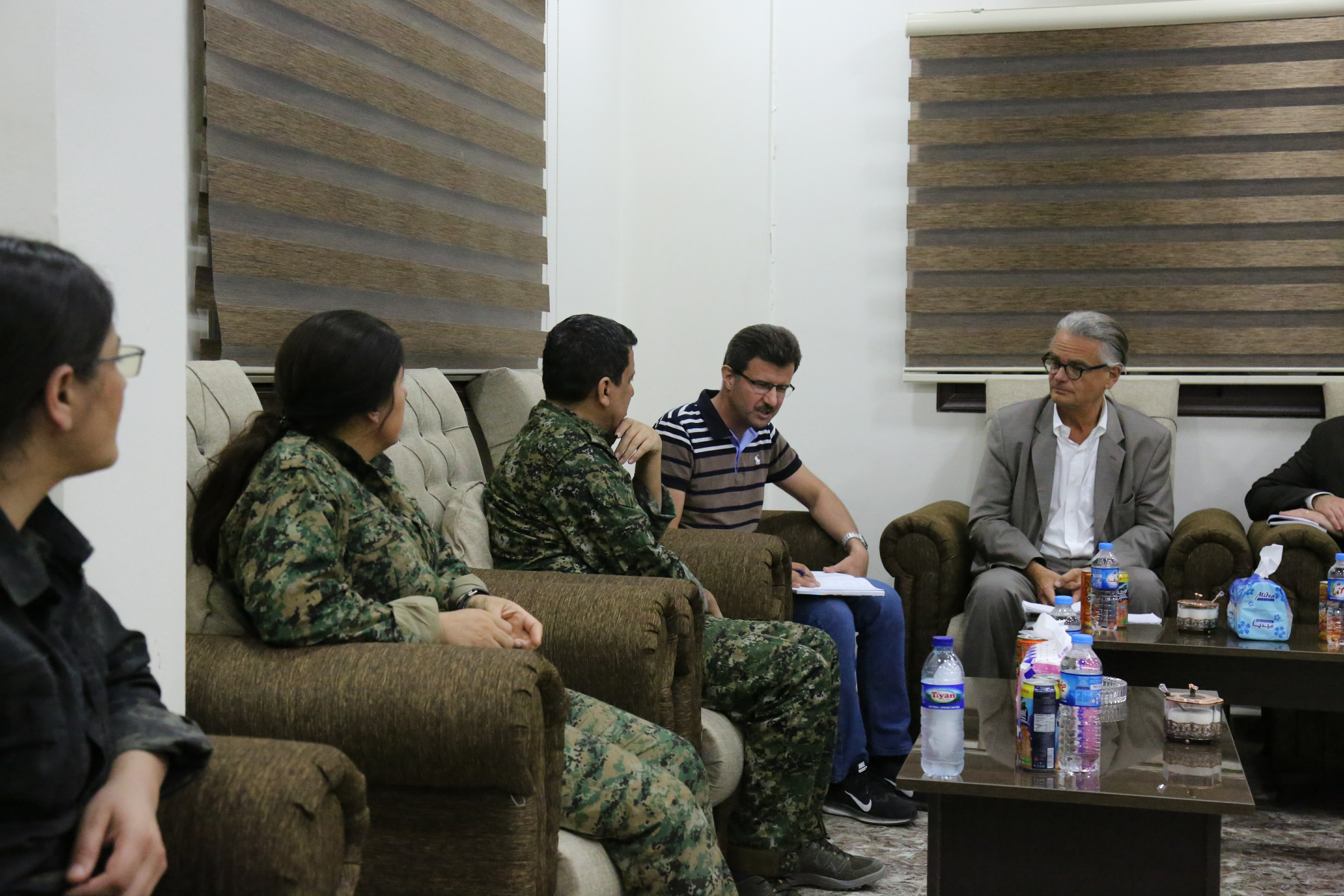 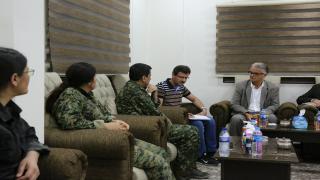 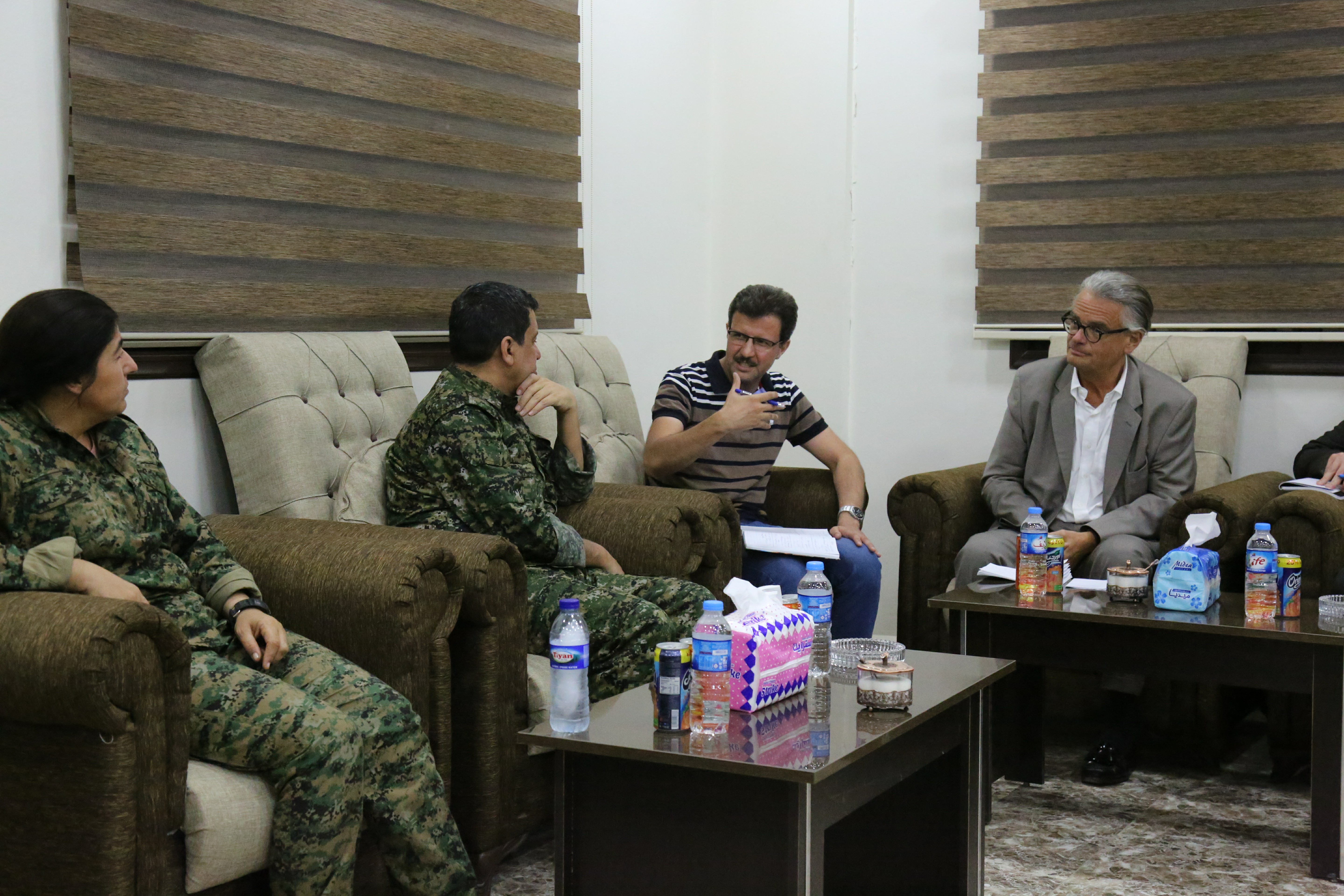 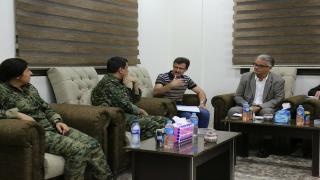 The Turkish occupation army’s bombardment caused the destruction of a house on a family co...