In a poll on the Syrian clans' forum held in Ain Issa, northeast of Syria,  the politician Mohamed al-Huwaidi explained that the forum of the Syrian clans held on May 3 by the Syrian Democratic Council(MSD) had achieved great success. "The success of this forum is itself a victory over sedition from the Turks, the Muslim Brotherhood and the Qataris and all who sought to stir up ethnic and sectarian strife. "

Mohammed al-Huwaidi said that despite the fact that the channels of the regime and the opposition tried to thwart the forum by publishing sectarian and racist statements and the betrayal of those who attend, they were disappointed. "The number of attendees exceeded all expectations. This great and remarkable presence of the Syrian tribes discussed the most complex issues and touched upon the roots of the crisis."

He said that this meeting serves as a cornerstone for building Syria's future and confronting external ambitions.

Al-Huwaidi explained that the final statement of the forum, which confirmed the unity of the Syrian territory, and the expulsion of the occupation in all its forms, and this is what every Syrian wishes "I do not think that there is a national political trend that is not linked to external agendas condemns or rejects this Syrian-Syrian national statement. "

He added, "Of course, Russia has strategic interests with the parties to the conflict, such as Turkey and Israel, and always seeks to secure its interests at the expense of the suffering of the Syrian people, and has always conducted deals with the so-called opposition which resulted in the displacement of hundreds of thousands of Syrians through the so-called national reconciliation, and impose the status quo on the people and this is rejected by SDF. "

"The path of Astana is only a path to share the influence between the guarantor countries and the transfer of the crisis to Idlib and Afrin, to be later hit stability in the liberated areas, this is the policy of Russia in dealing with the Syrian crisis since the first day. "

He continued: " we find that the statement of Moscow is unrealistic, and I think that this statement to encourage Erdogan to stick to the deal of S-400 to keep Turkey away from NATO, today Russia no longer have cards in Syria to trade with Ankara after deals  of Aleppo and Afrin, so that it works to exploit the Kurdish issue.

Al-Huwaidi pointed out that the Ain Issa forum held on May 3, attended by representatives of 70 clans within Syria, was welcomed by Arabs and internationally. "We are talking about the reconstruction of which Russia will not have a share in the Syrian north.

The politician Mohammed al-Huwaidi said it is necessary for the Syrian Democratic Council(MSD), the tribes in the region and the existing civil society institutions to close the doors exploited by Turkey and others in order to strike the components of the region.

The Afrin Liberation Forces HRE carried out an operation against the mercenaries of al-Hamza...

Afrin people" We to resist till return our home

The displaced people of Afrin said that they will continue the resistance until the liberati...

6 years passed, AA made an alternative to the nation-state and solution to Syrian crisis

Eyewitness: occupation aims to inflict the largest number of victims during its attacks on Afrin

Afrin people" We to resist till return our home

​​​​​​​Arab clans: All sects must be involved in running country to solve Syrian crisis

Displaced from Serekaniye, witness to the most heinous crimes of Turkish aggression

6 years passed, AA made an alternative to the nation-state and solution to Syrian crisis 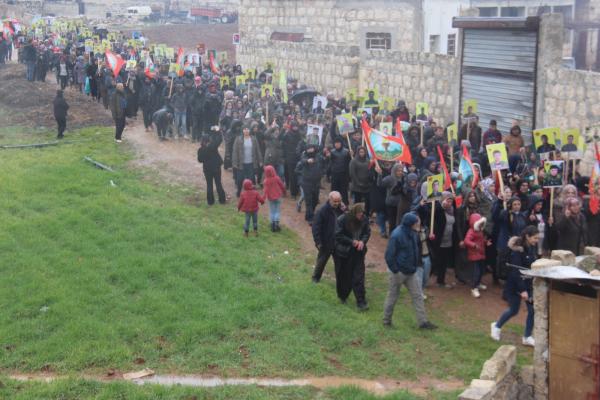 - ​​​​​​​Arab clans: All sects must be involved in running country to solve Syrian crisis

- 6 years passed, AA made an alternative to the nation-state and solution to Syrian crisis

- Displaced from Serekaniye, witness to the most heinous crimes of Turkish aggression

- Afrin people" We to resist till return our home