The international coalition against ISIS issued a statement marking the first anniversary of the defeat of ISIS in Al-Baguz in theeastern countryside of  Deir ez-Zor.

"On this day, 2019, after the historic victory in the battle of Baguoz, the physical caliphate of ISIS was eliminated," the statement said. "We therefore value the memory of those who gave their lives in the Iraqi army, the SDF and the international coalition against ISIS."

The statement stressed that the victory over ISIS in its last pocket in the Euphrates River Valley proved the ability of the partner forces as well as the commitment of the international coalition forces to strike a severe blow to ISIS as well as the liberation of the territory under its control.

The statement praised the role of the heroes who were killed in combat as well as wounded by "partner forces in our fight against ISIS in Iraq and Syria."

"Because of their enormous sacrifices and the strength and success of Iraqi forces, The Sdf and coalition fighters, we have reached a point where our partners on the ground can eliminate the remnants of ISIS and prevent its return on their own," the statement added.

"The liberation of the Baguz at the hands of the SDF has culminated in a multi-year conflict by the people of Iraq, Syria, the 77 countries and organizations that have joined the Joint Task Force Coalition to defeat ISIS," said Kenneth McKenzie, commander of the U.S. Army Central Command in the" Steel Determination Operations".

" He noted in a video posted on the site of the Central Command of the U.S. Army on "Twitter" that the following year great progress was made in the pursuit and destruction of the remnants of ISIS and securing its permanent defeat, pointing out the survival of "dangerous ideology and the large number of followers of ISIS in Iraq, Syria and abroad."

He stressed the commitment of the international coalition to support the Iraqi and Syrian people in their efforts to eradicate ISIS and achieve lasting peace and prosperity.

"I want to take this moment, one year after the liberation of Baguoz, to honor the people of Iraq, Syria and the coalition for their sacrifices and dedication to liberating the region from this evil," he concluded. 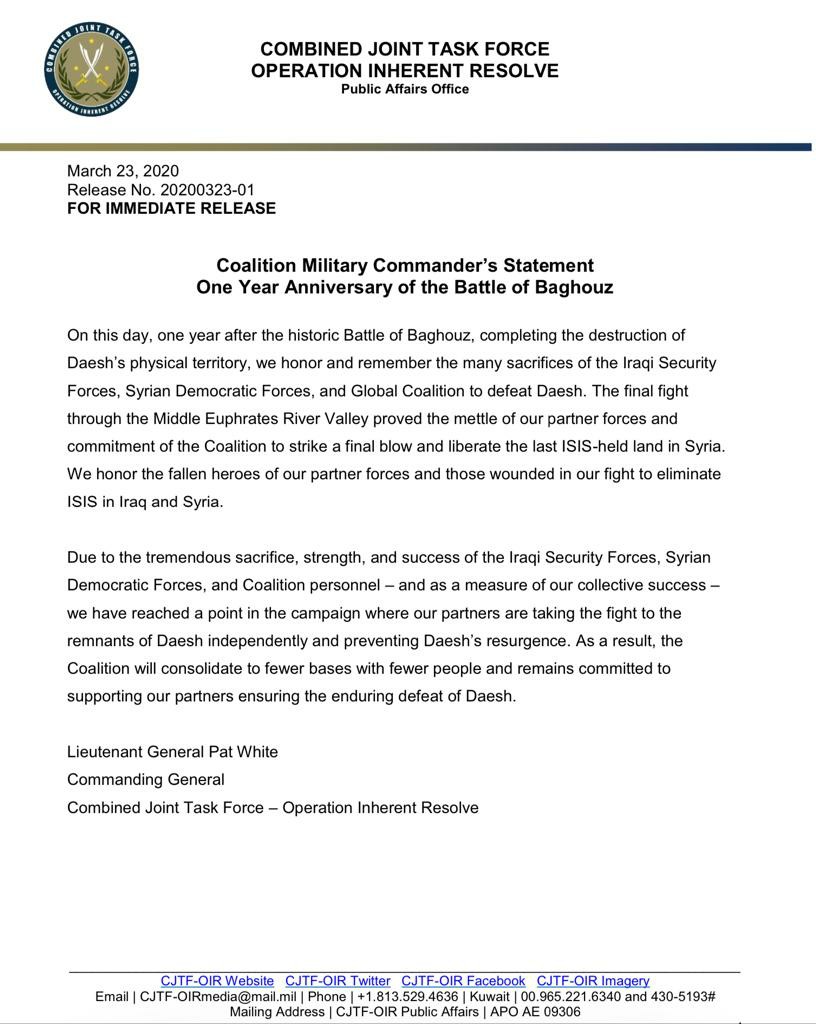