Yesterday, the Executive Council held its second annual meeting in the Autonomous Administration's building in Raqqa, during which it discussed the political situation in the region, reviewed all the work in the seven departments, evaluated it and made clear the difficulties that the Autonomous Administration faced during 2020, in addition to numerous proposals and interventions by the participants.

During the meeting, many projects and proposals were put forward and a new work plan for 2021 was developed to be discussed later, which was revealed by the Co-chair of the Executive Council in the Autonomous Administration of North and East Syria, Berivan Khaled.

In the political field

Continuing political work to solve the Syrian crisis, based on the Geneva Declaration and UN Resolution No 2254.

Work to reconsider the formation of the bodies that represent the Syrian people at the Geneva meeting and the Syrian constitution.

Serious and relentless pursuit for gaining political recognition of the Autonomous Administration within the political solution to the Syrian crisis, and support for the continuation of Kurdish-Kurdish dialogue within the Syrian-Syrian dialogue system, with the aim of reaching a national opposition far from foreign agenda.

In the security and military field 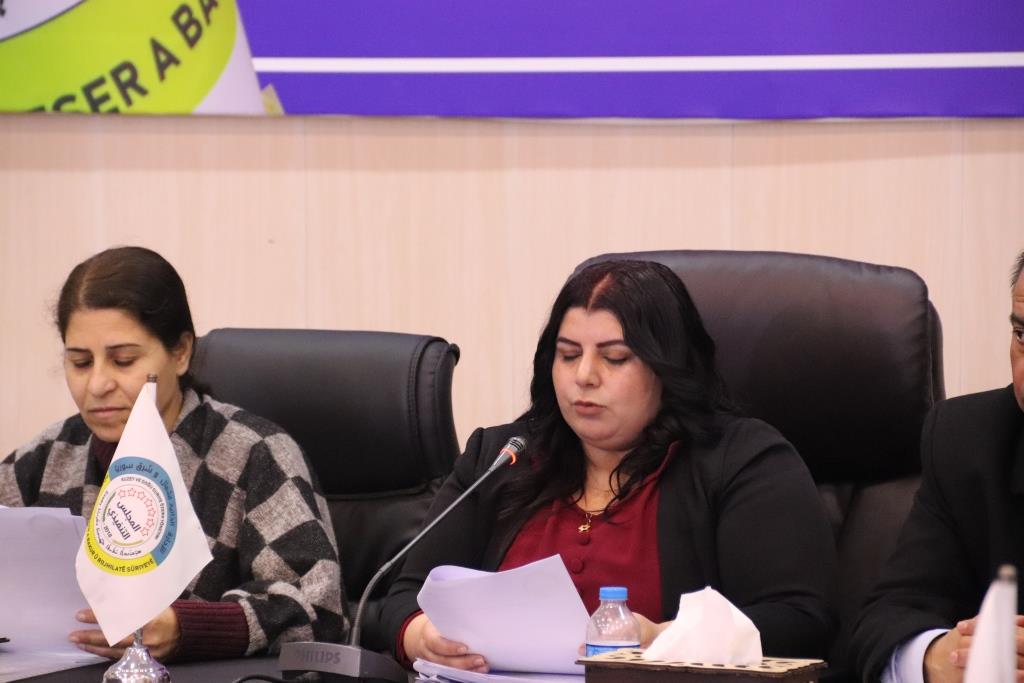 Maintaining security and stability in north and east Syria.

Defending the unity and sovereignty of the Syrian territories.

Seeking to liberate and restore the lands occupied by Turkey and its mercenaries.

Developing the principle of protection, defense and resistance in the face of external attacks.

Defending and preserving the gains of the peoples of north and east Syria.

Continuing to support the security services to eliminate ISIS cells, achieve civil peace, and limit the spread of phenomena that disrupt the culture and traditions of our society.

The security services commitment to the law and the implementation of judicial rulings.

In the field of organization and administrative work 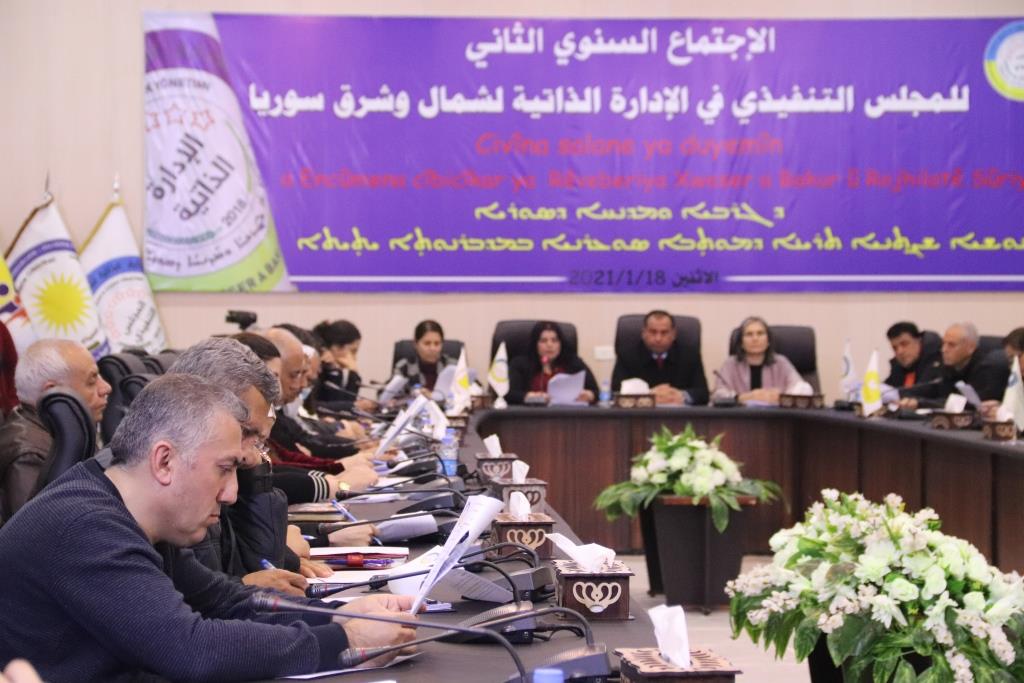 Activating and developing the central and sub-central planning, development and statistics offices, and providing them with the necessary expertise.

Activating and developing the supervision apparatus within the Autonomous Administration institutions, providing it with the necessary expertise and specializations, and combating all forms of corruption.

Work to hold massive public meetings and listen to the opinions of the masses in order to find solutions to their suffering.

Following-up work on organizing draft laws and issuing circulars and administrative decisions to facilitate the institutional workflow in the Autonomous Administration of North and East Syria.

Following-up work to simplify transaction procedures to reduce bureaucracy and reduce the burden on the citizen.

Intensifying efforts to improve the workflow mechanism to support the draft of self-defense duty, and to make the defense mission a priority for Autonomous and Civil Administrations.

Qualifying and training women's cadres in administrations, in addition to empowering them politically and administratively.

Paying attention to the security aspect through training, qualifying cadres and providing the required supplies.

In the field of services and infrastructure 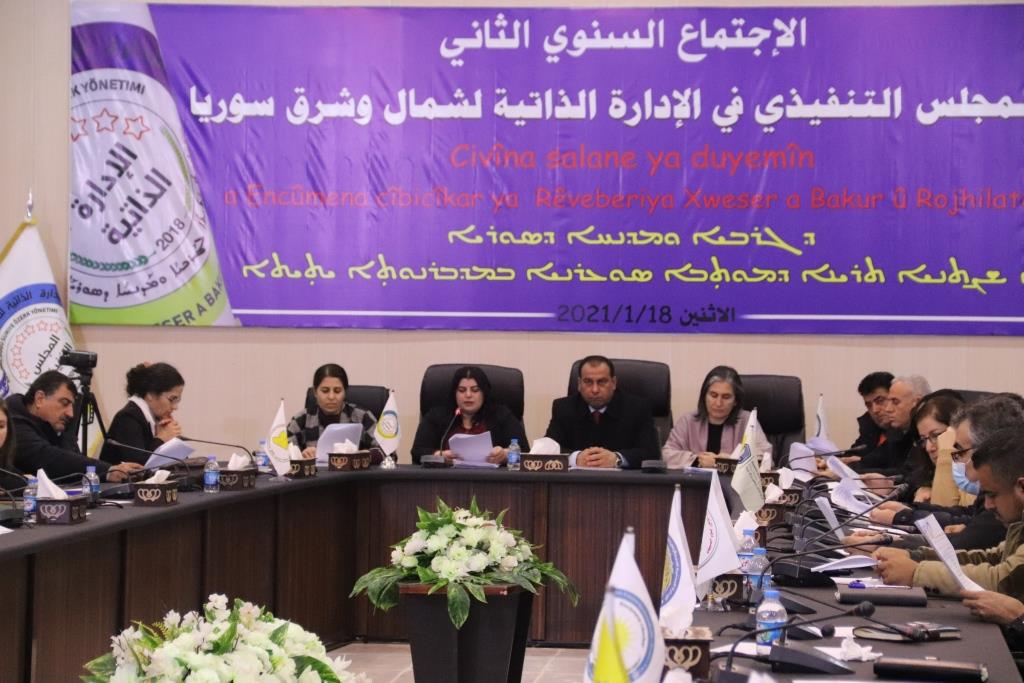 Giving priority to service projects related to infrastructure, such as paving and asphalting roads, maintaining bridges and ferries, extending water, sewage networks and electricity networks, including expansion and maintenance.

Supporting the health sector by restoring existing hospitals and health centers, securing their needs and equipment, building new specialized hospitals, and taking the necessary precautions to prevent the Corona pandemic.

Supporting the education and higher education sector, following up the work on the maintenance and restoration of schools, building new schools, working on standardizing curricula and securing textbooks.

Continuing work to expand organizational plans as needed, and to limit random construction.

Taking care of existing sports facilities, building new ones, and establishing vocational development centers for youth in all regions.

Supporting the culture, tourism and antiquities sector to ensure the preservation of heritage and antiquities, following-up documenting the violations against archaeological sites and sending them to the concerned authorities.

Increasing the number of bakeries to cover the citizens' need for bread, and improving its quality.

Working to protect environment and find solutions to environmental pollution problems in all its forms, especially in landfills.

In the field of development projects

Encouraging and providing an appropriate environment for private projects and investments in order to reach self-sufficiency.

Encouraging productive sectors that depend on local products to contribute to providing job opportunities and securing the needs of citizens at encouraging prices.

Carrying out public and private economic and service projects for women.

In the field of martyrs' families, camps, and humanitarian affairs

Taking care of camp affairs, improving the conditions of the displaced, and working with all means to bring them back to their homes.

Taking care of the humanitarian file, dealing with it as one integrated file and supporting the office in implementing its strategy.

Building care centers for orphans and people with special needs according to need and capabilities.