October 25 marks the 28th anniversary of the guerrilla operation of the fighter Beritan, who was martyred during the treason war by the Kurdistan Democratic Party (KDP) in cooperation with the Turkish occupation state and Iran in the Khwakurk region in 1992 in Başur, southern Kurdistan against the Kurdish Liberation Movement.

Gulnaz Qaratash, known as the militant Britan Hevi, born in 1971 in the village of Solhan in Gulk, she comes from the Dersim region in northern Kurdistan (Bakur Kurdistan).

Brittan joined the ranks of the KLM with a group of youth from Istanbul. Their first experience was in Karela, where she set off from Mount Judi to Mount Khwakurk in the scorching summer of 1991.

The fighter Brittan had charisma, lively spirit and a laughing face, as well as her high leading skills, leaving great affect on her companions that distinguished her unrelenting will.

Brittan was the first fighter who confronted the authoritarian mentality with the thought of a free woman. She had a prominent role in raisning women awareness depending on the free and conscious thought. She challenged the death. Rather, she removed fear from the hearts of her comrades wiitingly.

Member of the General Council of the Free Kurdistan Women Organization in Başur, "southern Kurdistan", Soma Farhad, recalled her resistance and struggle, saying: " she has proven women power to fight, protect themselves and their people. She has a clear message that is breaking the restrictive mentality of women through her charisma as she created a new faith.

"Her guerrilla operation delivered the free woman's clear message that will not surrender in the face of betrayal. She chose to die freely rather than become a captive." She added.

Her free thought made her a leader soon.

The period of joining the KLM, represented a stage in which women marched towards military mobilization and faced the male mentality. Thanks to the leader Abdullah Ocalan, women formed the YJA-STAR units that include thousands of Kurdish fighters and other nationalities today.

Here, she had an important role in women's mobilization, as she carried out many military operations with her comrades to prove that woman could fight and protect themselves.

Brittan was telling her companions, "There is no weak woman, but one whose power has been robbed."

In less than a month, she could become a faction leader, supervised and trained a group of men fighters and women fighters.

In 1992, the Turkish occupation state, Iran and the Kurdistan Democratic Party agreed on eleminating the KLM, the fighter Brittan was among those who stood in the vanguard to defend themselves and break the attacks of the traitors.

The Brigade of the Martyr Beritan fought to the last breath, to the extent that running out of ammunition did not force her to fall into the siege imposed by the forces of the Kurdistan Democratic Party, where the fighter Brittan refused to surrender to traitors and record the history of the resistance woman in the face of brothers betrayal.

The fighter Brittan carried out her heroic operation while she was besieged on the top of the Mount "Lilakan" in Khwakurk by the forces of the Kurdistan Democratic Party. She chose to throw herself from the top of the mountain on October 25 1992 - that is, only a year after joining the KLM - to cry out "No to betrayal". 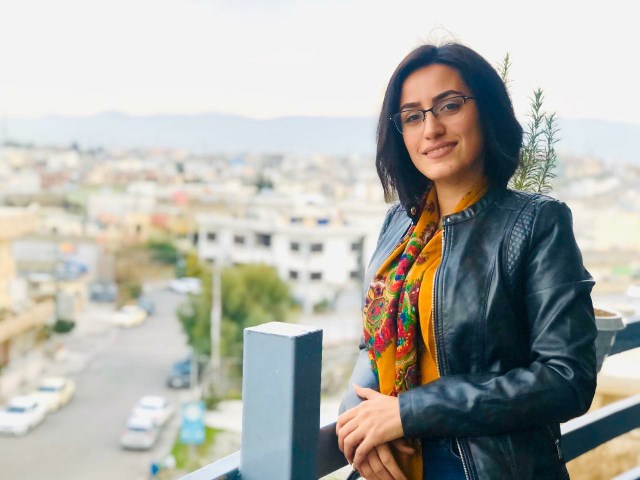 Soma Farhad, member of the General Council of the Free Kurdistan Women Organization in Basur, "southern Kurdistan", indicated that she is talking today about a resistance that took place 28 years ago. However, what is being hatched today against tKurdistan is a continuation of the betrayal and complicity of some Kurdish parties to their people. The hostile plans are continuing to the present day.

She said, "occupation is going on in all regions of Kurdistan from Haftanin, Biradost and NE Syria, with the complicity and betrayal of one of the Kurdish parties of their countrymen."

"Members of the Peshmerga forces who gave up their arms and the approach of treason, believed in the path of Beritan."

After that historical response to the approach of betrayal, many of the Peshmerga forces abandoned their arms, and even named their daughters and granddaughters as "Beritan".

One of the Peshmerga says: “After they besieged Beritan, they asked her to surrender, but she refused and threw herself from the top of the esieged mount as an advice to those pursues a betrayal approach against his people.

Member of the General Council of the Free Kurdistan Women Organization in Başur, "southern Kurdistan", Soma Farhad, says that "Brittan operation was of great importance at that stage, to counter the approach of betrayal."

"The KDP has not abandoned this approach of cooperation with the occupation."

The KDP has not abandoned this approach, as the successive attacks in southern Kurdistan, NE Syria by the Turkish occupation state to eliminate the Kurdish people are the best proof of that.

The events of the heroic resistance shown by the fighters of the Kurdistan Liberation Movement during the current year 2020 in Haftanin, Şingal and other areas in Başur (southern Kurdistan), in addition to the establishment by the Democratic Party of points on the borders with Rojava for the stationing of Turkish intelligence, not to mention the legitimization of the attacks before the eyes are the sequence of events 28 years ago, but the resistance of the Kurdish people, which was and is still stronger than all the plans for their extermination.

It adds to the archives of the Democratic Party, the agreement it concluded on October 9, 2020 with the Iraqi government on Şingal, regarding the security and administrative file, after it fled it to genocide by the ISIS mercenaries.

This also comes after Nechirvan Barzani's visit to the Turkish state on September 4, under circumstances in which the Turkish occupation attacks the Kurdish people in Başur Kurdistan after receiving the green light from the Kurdistan Democrat and other international parties.

Shaddadi District Council issued an appeal to organizations concerned with following up on v...

Star Congress or Congreya Star in the Zorava Quarter in the Syrian capital Damascus called o...

​​​​​​​On International Day for Elimination of Violence against Women ... Calls for world free of violence

Newroz Cultural and Social Association held a symposium at its headquarters in the Lebanese ...
Old Website