At 10:30 am on Friday, 2 November 2018, the Turkish army deliberately targeted ANHA's correspondents Gulistan Mohammed and Ibrahim Ahmed in North Syria in Girê Spî / Tel Abyed city, located on the Syrian-Turkish border, using sniper weapons that resulted in wounding them seriously, and they were speedily taken to the hospital in Tel-Abyed /Girê Spî city.

Our comrades Ibrahim Ahmed and Gulistan Mohammed were on a press task to cover the violations practiced by the Turkish army against the civilians in the residential neighborhoods near the border after the Turkish army shelled and fired at the city and its countryside and where the girl Sarah Mustafa was martyred who is at 11-year-old and several other civilians got wounded.

When our comrades arrived to the area to carry out their press duties, the Turkish army's elements deliberately targeted them with sniper's weapons. They hit the journalist Ibrahim Ahmed in his hand and the comrade Gulistan Mohammed in her face. Then, they were taken to Girê Spî General Hospital for receiving the medical treatment. The journalist Gulistan's status was critical so she was taken to Manbij for receiving the medical treatment at Manbij Specialist Hospital, underwent a surgical operation and was placed in intensive care.

Our comrades' record, place of work and residence are as follows:

- The injury: A bullet in the hand and he receiving treatment at Girê Spî General Hospital.

- The name and Surname: Gulistan Mohammed

- The injury: A bullet in the face and her condition was critical so she was transferred to the city of Manbij and underwent a surgical operation at Manbij Specialist Hospital and she is in intensive care now.

In this regard, since the establishment of Hawar news agency (ANHA) in the spring of 2013 in line with the deterioration of the situation in Syria, we have taken upon ourselves as a group of activists and journalists to convey the reality of the humanitarian, social and field situation on the ground to be the voice of the people of North and East Syria adopting the professional principals and the humanitarian and press moral as a basis for ourselves in our coverage of the situation, and in this principle, wef became the most credible agency in Syria in general and we were in every social and military event in Syria.

With the beginning of the emergence of IS terrorist organization in Syria and Iraq which was considered the greatest threat to the world, we, Hawar news agency (ANHA) with its correspondents who are existed in most of the Syrian regions, especially in the north and east of the country, continue to cover the battles and liberation processes of the civilians from terrorism. Three reporters from (ANHA) were martyred in a suicide bombing carried out by IS terrorists among the civilians in the countryside of Deir ez-Zor in the summer of 2017. Three correspondents were also injured while they were covering the battles of the Syrian Democratic Forces (SDF) and the International Coalition against the terrorist organization of IS, and covering the events in North Syria.

In this regard, we say to the world public opinion, the press in particular and those concerned with the protection of the press freedoms in the world that we in (ANHA) condemn the deliberate sniping operation against our correspondents by the Turkish state. We call upon the international organizations concerned to protect the journalists to carry out their duties to respond to this violation of the right of the press, to put pressure on the Turkish state to stop its terrorism against the press and to take the necessary measures of sanctions and alerts to prevent that from being repeated. 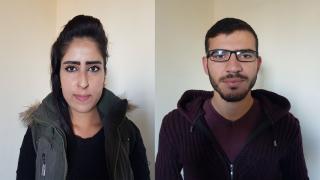 The co-chair of the religious establishment in the Euphrates region, Abd al-Rahman Shawkat...

Ibrahim Al-Qaftan warned against the results of the "settlements", stressing that they rel...

It was reported the village of Hisha in rural Ain Issa was open to Turkish occupation shelli...
Old Website