Lawyers, jurists, judicial institutions and the houses of women in northern and eastern Syria and the city of Aleppo condemned the escalating policies of Erdogan government against the region, asserting that any aggression against this peaceful and secure region will not target a specific political entity or nationality, but rather a danger to the people of the region in Kurdish and Arab on the occasion of World Peace Day, they appealed to the United Nations to expedite the application of Chapter VII of its Charter against the rogue Turkish state to international custom and law.

On the occasion of the International Day of Peace, which falls on September 1 of each year, the Social Justice Council in Manbij, Aleppo and Al-Hasakah, the Women's Council for Social Justice in Kobani, the houses of Women and the Peace Committees, lawyers and jurists in Qamishlo, released separate statements to the public.

The members of the Social Justice Council of the Democratic Civil Administration and members of the Reconciliation Committees working in the lines and councils gathered in front of the council building.

The statement included, “We condemn and denounce the Turkish State's unlawful attack on our land and its violation of all international laws and norms. The Turkish State has committed and continues to commit crimes and massacres before the eyes of the international community, and continues to endanger the lives of the safe people, destabilize the state of security and encouraging bloodshed.

The cycle of violence has not ceased over the past centuries, where it continues. Turkey's support for terrorist organizations is no longer hidden. All forces agree that stopping the Syrian bloodshed and ending the war that is raging through a peaceful solution and the establishment of a free and pluralistic democratic system in the country, which will not be in the interest of the Turkish state, which will do everything possible to destroy Syria's cultural heritage, enforce forced displacement and demographic, sectarian and ethnic change on different regions.

"What is happening in Syria, especially in Afrin, is considered crimes committed against humanity siege and shelling, amid the silence of the institutions claiming international legitimacy." the statement said.

In turn, we will be loyal to the blood of the martyrs who sacrificed their lives as a sacrifice for this land.

In the same context, the Women's Council for Social Justice in the Euphrates region issued a statement read by the council member Rodin Ibrahim, which reads:

"We condemn and denounce Erdogan's aggressive statements against our regions. This is an aggressive approach aimed at nourishing the roots of terrorism and spreading chaos and destruction. The Turkish state is hostile to the Kurds, Arabs, Assyrians, Syriacs and Turkmens living in northern and eastern Syria. The children of the components on this geography have achieved a democratic revolution in their areas, on the basis of the concept of democratic nation and the brotherhood of peoples, they built a socio-economic and cultural system based on free and democratic life, and provided more than ten thousand martyrs, in addition to the wounded and injured in order to achieve security and stability.

Hence, we call on the countries of the world, the United Nations and human rights organizations to support us to stand by those who fought terrorism, and those who have achieved security and stability in the region and confront those who support terrorism and fight democracy.

The statement also condemned the recent abuses of rights and democracy by the Justice and Development Government by arresting mayors and seizing the municipalities of Amed, Mardin and Wan, and noted that this act is a war against the will of the peoples to undermine their legitimate will.

As part of the campaign launched by Kongra Star under the slogan "Keep your land and your dignity ... defeat the occupation and ISIS," the Social Justice Council and the Association of Women in Sheikh Maksoud and Ashrafieh districts made a statement in this regard.

The statement was read by Brishan Rasheed, a member of the Social Justice Council Coordinator. It reads:

"The real crisis in the Middle East, in which the occupying and dominant forces try to take advantage of these problems and fuel them to serve their own interests, and aims to block all solutions in Syria, as they try to eliminate any real democratic thought.

Today, the Turkish threats aim to thwart the project of the democratic nation and the Autonomous Administration, because these projects constitute a nightmare for the Turkish state, after failing to invade the north and east of the Euphrates, the fascist Erdogan returned to launch attacks on the Kurdish areas in northern Kurdistan, and robbed their municipalities gained by the elections.”

After the failure of Turkey's proxy war with ISIS and Salafist forces, it carried out direct aggression on northern and eastern Syria by occupying the Kurdish-dominated Afrin, committing the most heinous crimes against humanity, infrastructure, demographic change, ethnic cleansing, genocide, and other crimes as stipulated in The Rome Statute, which is the competence of the International Criminal Court against its own people.

It has also stepped up its threats against the northern and eastern regions of Syria under false pretexts to impose its conditions on the establishment of a safe area on the border, an occupation to undermine the democratic experience of the Autonomous Administration, and to prevent the establishment of a political entity representing the democratic nation and unity of peoples and the culture of coexistence, at a time when the peoples of north and east Syria adhere to the peaceful approach and their readiness to resolve, spare the region the scourge of war, achieve peace and democracy and end the war.

In his latest message, the leader Abdullah Ocalan expressed his readiness to resolve and avoid the region the scourge of war and peace, saying: I want the Kurdish people to have a place, and that he continues to struggle for peace and democracy since the era of Turguth Ozal to this day, and the Turkish government must undertake its part in this regard.

The Turkish state has met this call with more military threats and repression policies against the remaining margin of democracy in the country, a coup against the will of the people and the dismissal and seizure of the mayors of Amed, Wan and Mardin by illegal arbitrary measures.

We in the institutions of social justice condemn the escalating policies of the fascist government of Erdogan against northern and eastern Syria, and affirm that any aggression against this peaceful and secure region will not target a specific political entity or nationality, but poses a threat to the people of the region as a Kurd, Arabs and Syriac Turkmenistan, and condemn repressive practices against elected municipalities.

We also call on the United Nations and all peace-loving and pro-peace organizations, to preserve the security of the region, to achieve peace and democracy with organic ties, to secure political rights and to protect civil liberties, to endeavor to halt Turkish threats and create a political climate for the start of democratic dialogue in order to find a solution to the crisis in Syria constitutionally guarantees the rights of all components of the people. "

The statement of the Al-Jazeera Lawyers' Union drew attention to the fact that the Turkish state's intervention, aggression and occupation in Syria are not related to any right, but are based on political considerations that are in defiance of the objectives of the United Nations, whose members signed the Charter in San Francisco. On 26 June 1945, he said: “It is a testimony to the utmost necessity and the best need. This obnoxious Turkish challenge is to target an entire generation of individual and group people on a specific geography, to undermine fundamental human rights, to violate human dignity and value. 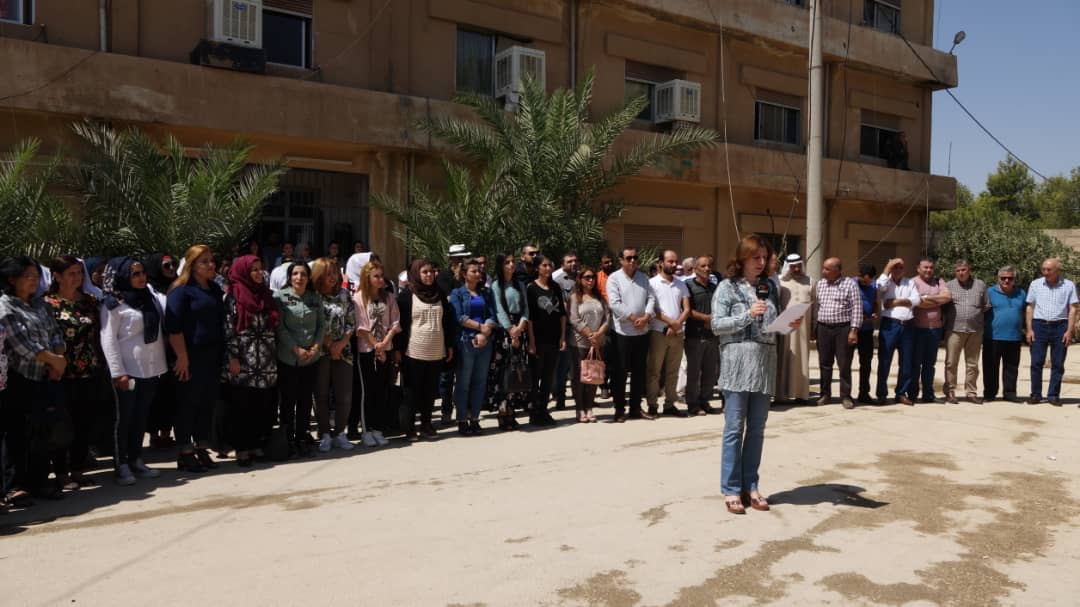 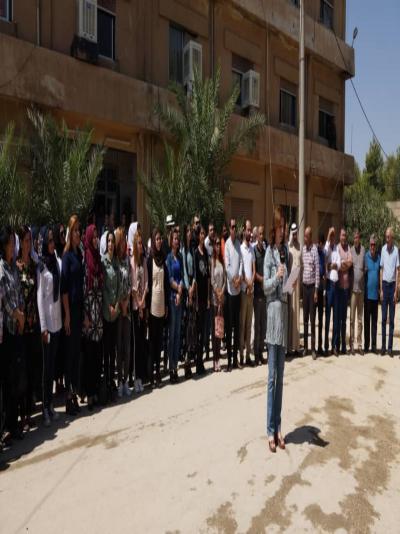 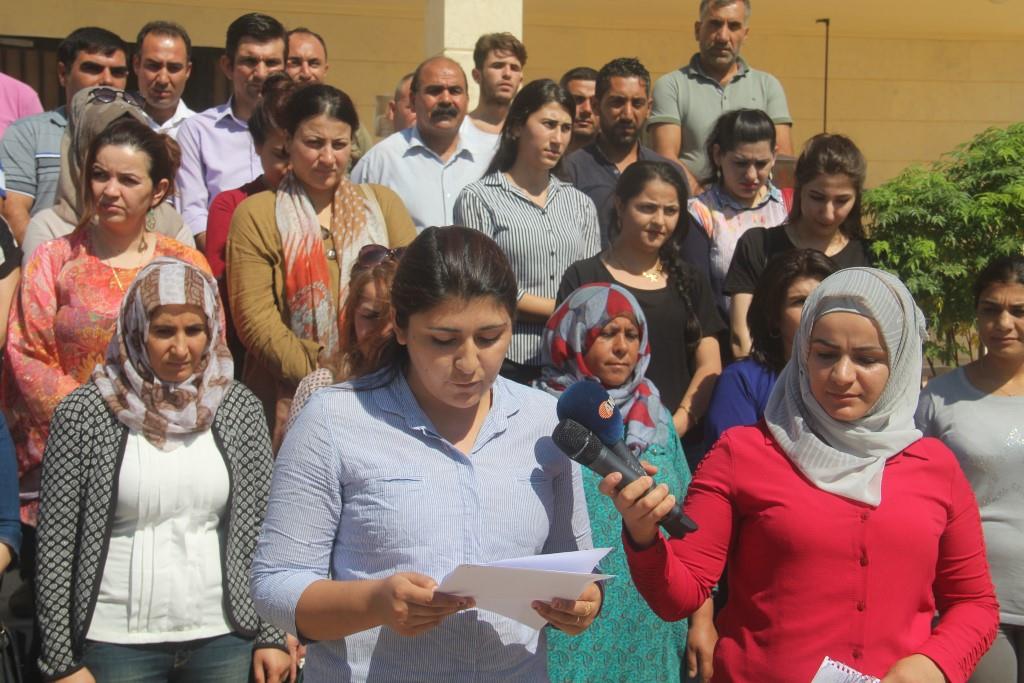 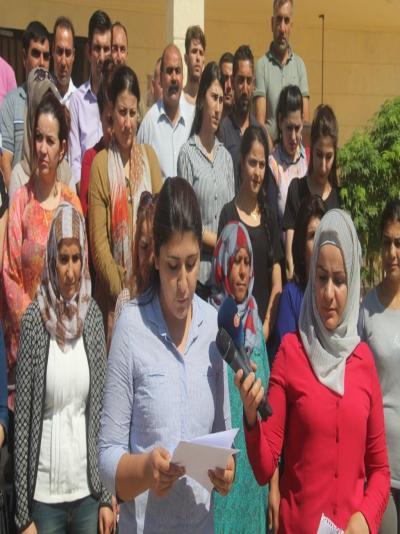 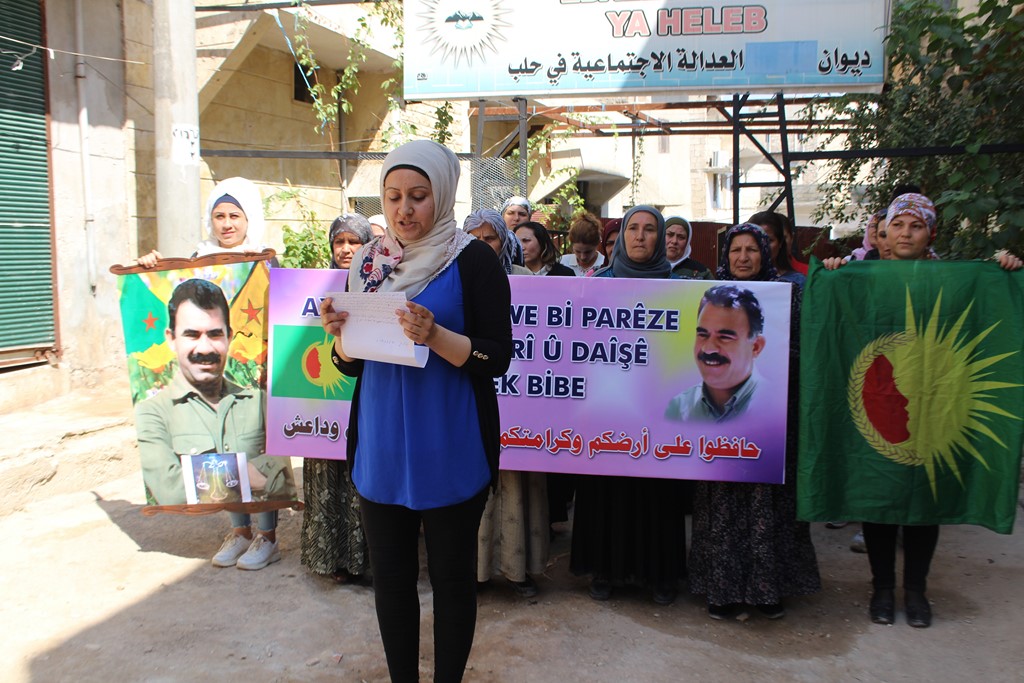 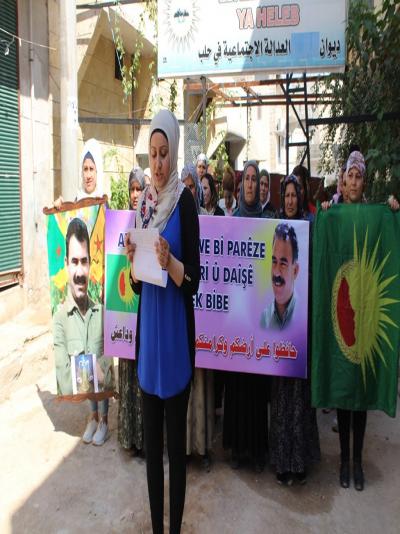 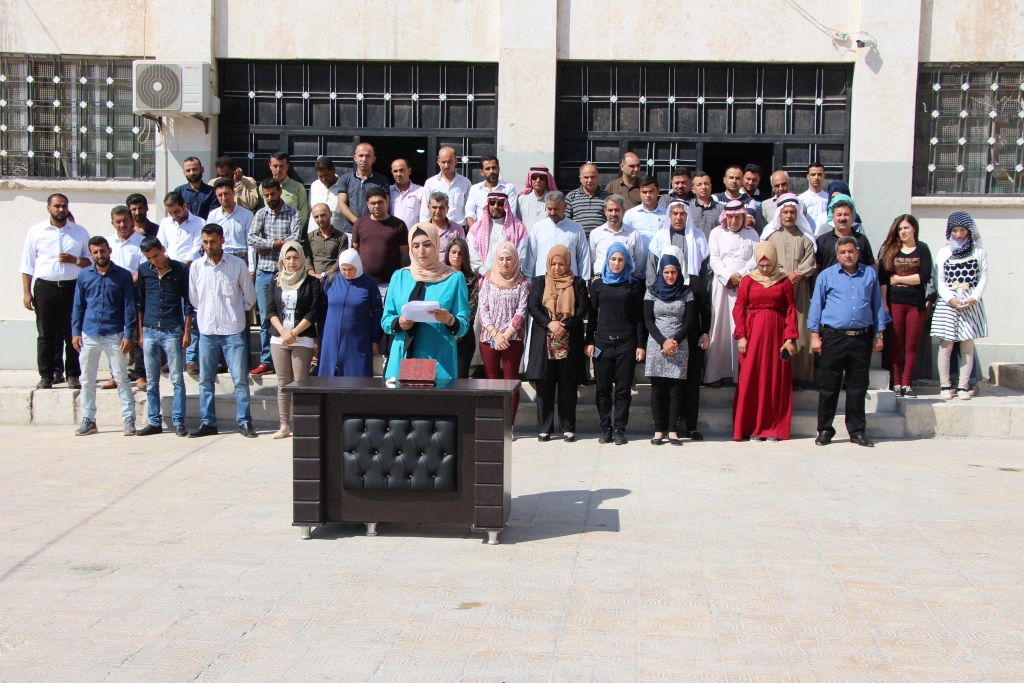 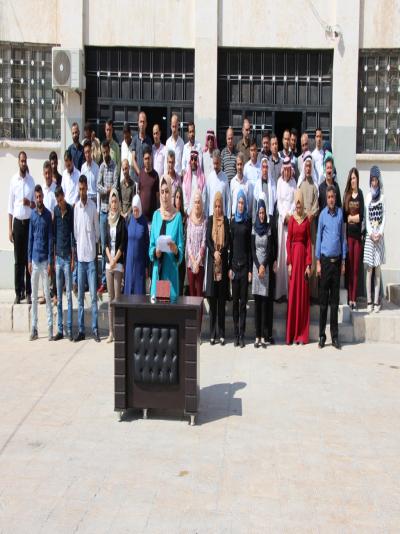 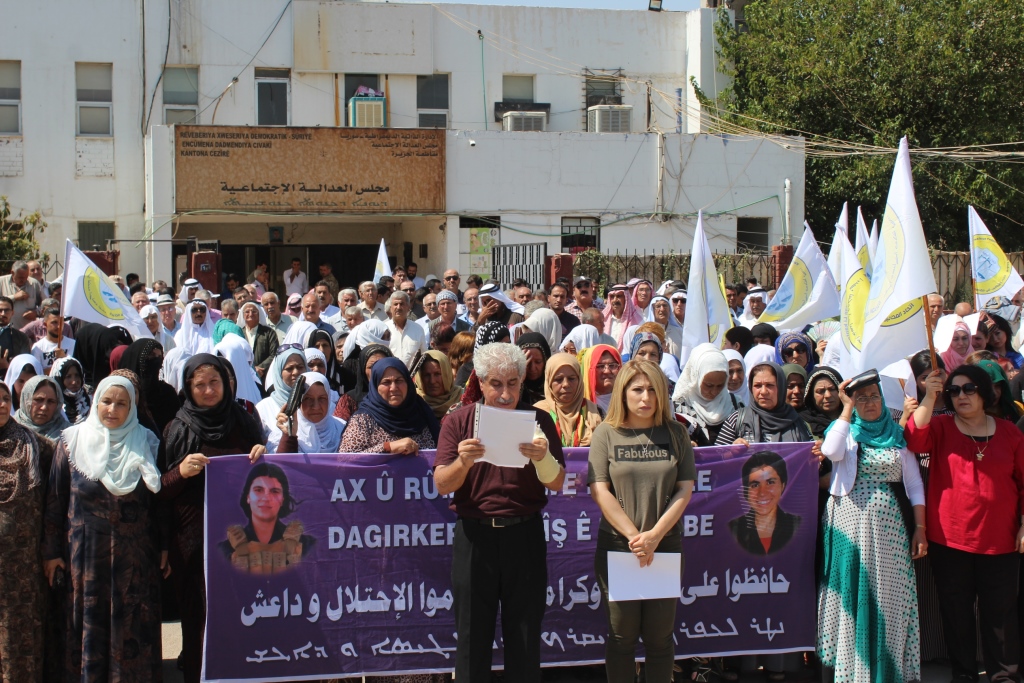 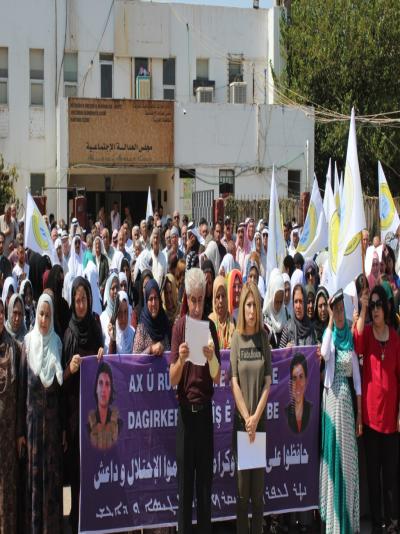 The Turkish occupation army and its mercenaries bombed a while ago the village of Kor Hassen...

In Al-Hol camp, security forces found the body of an Iraqi refugee woman who was "strangled"...
Old Website

- Russia promoted a chemical provocation in Idlib, Turkey is upset by al-Kazemi's rapprochement with France