Since Turkey and its mercenaries occupied the city of Serêkaniyê and Girê Spî  / Tal Abyad, they have been carrying out the demographic change after displacing the original inhabitants of the city as a result of the brutal bombing of the city. While the majority of the displaced today live at camps, the Turkish occupation brings the mercenaries' families from different parts of Syria to the homes of the displaced.

The 41-year-old Hevin Abdo, is the mother of three children from Serêkaniyê. She was displaced along with her children, husband and relatives on October 9, 2019, the first day of Turkish occupation attacks on the area, whose bombing, rockets and artillery caused a massive exodus and displacement of people to other areas.

"On October 9, I was drinking coffee at 4 o'clock with some relatives. Suddenly we heard the sounds of shelling and loud explosions. I rushed out and saw horrified people running in the streets with their children. I didn't know what happened. People were on alert and they started to leave," she said.

"At the time, my expatiate borther called after watching the breaking news on television about Turkey's start of the military attacks on the area, which began to bomb the border villages and the city with rockets, guns and air raids," Hevin said.

"I didn't believe that, I said to myself that Turkey, as usual, would bomb several missiles and then calm down. I said no to my brother. There is nothing, everything is fine, I said that even though I could hear the sound of heavy shelling."

"As the sounds of the shelling and warplanes intensified, we felt panic about what was going on, even my guests went out and asked me to go out too, but I stayed with my family in the house. It was not long before I felt that there was no one left in the neighborhood. We had no solution but to go out in a circumstance where we did not know when the roof would fall above our heads. So we stayed away from the bombing places to the countryside of the city. We waited for it to stop to go home and after hours, they stopped and we expected that things would stop there. So my husband and I came home again, the coffee cups were still in place, but the house was full of dust, so I cleaned it like I would stay in it as usual."

"By nightfall, the shelling started intensively like a terrible nightmare. At around 23:00, we  headed to Tel Tamr city without carrying any pieces of the house, hoping that we would be back in the morning," Hevin said. 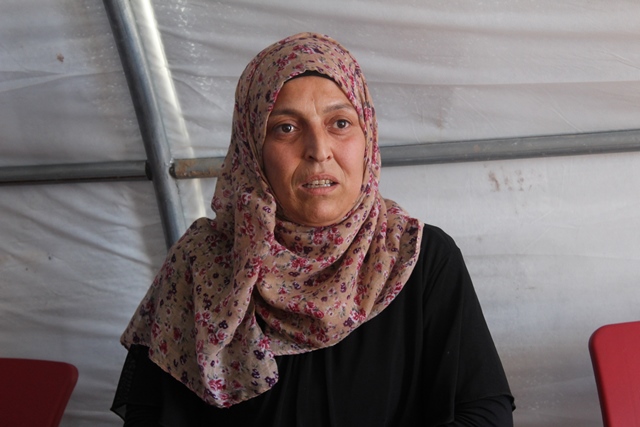 Hevin kept silent and her eyes were flooded with tears and she said, "Since we left that day, we have not returned to our home and city, and we are still waiting for the day of return." Hevin and her family have been living since their displacement in Washokani camp in Al-Hasakeh, and after several months of displacement, a text message arrives on Whatsapp on Hevin's phone from an anonymous number, saying, "Hi, Hevin, I want to get to know each other."

"I did not give that message any importance and blocked the number directly," but a few hours later, she received an SMS from the same number on her number, saying, "Why do not you go home, come back, we are waiting for you."

Hevin points out that this provocative message prompted her to respond to find out who was texting.

She adds that after speaking to him, she knew that he was one of the settlers in her house, from the Syrian city of Homs, and obtained her number from the phone book they left at home.

Hevin says that some acquaintances who remained in the city told her that the families of mercenaries who had entered her house wrote on the walls of the house the name "Abu Firas al-Jamjami".  The same acquaintance had sent her a video of her house showing the house and all the furniture, items collected by Hevin with misery years of her life. There were only some scraps and traces of war and destruction left.

All she wants is to go back to her city, sit in the shadows of her house, and live as safely as they did before the occupation, she noted.